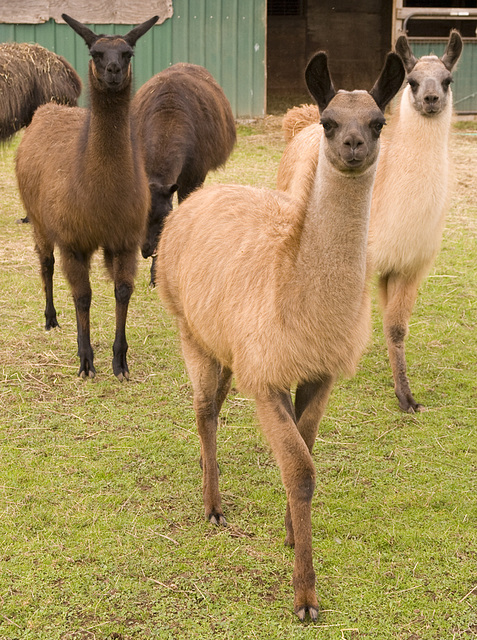 I was in their space (taking photos, of course) and TRIED to back up. Yeah, right.

With predators, leaving (especially running) triggers the chase-attack-kill instinct chain (that's why you do NOT run from a cougar!).

For llamas, which are prey animals, anything that leaves (and isn't TOO scary) gets followed ... and the faster it leaves, the faster it gets followed. For the individuals, it's just curiosity. For the species, it so happens that what would have been a minor threat turns into something that doesn't want to come back after being "followed" by a whole group of big animals.

If these baby llamas were baby guanacoes (their wild counterparts) instead, this behavior and its successes results in adults that have the inclination and confidence to run off the small and medium-sized predators that would otherwise decimate the next generation of babies.

And, just as in species we're more familiar with (including humans), the larger the group, the more confidence, and more risk-taking behavior. For example, Sage wouldn't begin to be the first to approach me if not backed up by her cohorts.

This bunch doesn't think I'm a scary person per se, but I did do a scary thing. Being in their space to take photos can mean I'm closer to at least one than they planned on (they like proximity choices to be entirely theirs). In this case, I was in the midst of the herd, and that was deemed "weird."

A more serious aspect of this behavior is that because normal llamas are "physically distant", far too many people get inappropriately excited when the "follow" response kicks in and unwittingly encourage it ... resulting in more than a few adults that chase humans out of their pasture. It's a balancing act, raising impressionable young llamas!
Suggested groups:
Comments