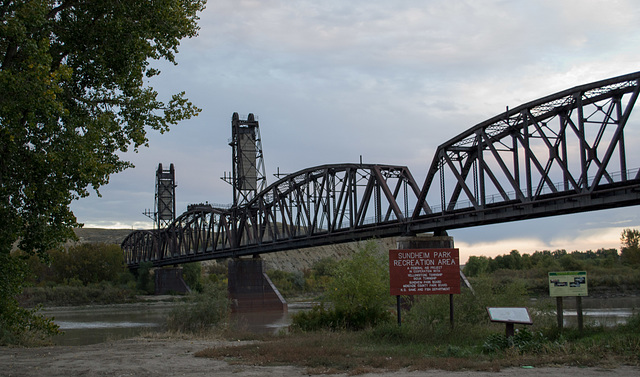 Heading west from the major oil development in North Dakota, an historic railroad bridge over the Yellowstone River. The bridge is no longer in use by railroads, but there is a bike path across it and into a nearby tunnel. Per the link below, the bridge has a fairly unique history. Construction of it started in 1912 at a time when the Yellowstone river was navigable and thus the bridge had to have a lift section to accommodate river traffic, but river traffic ceased in the next year and thus the lift section has only been raised once. To make matters worse, the rail line was built for an expected increase in rail traffic that never occurred, thus for most of its life as a railroad bridge, it saw only two trains a day. On top of that, it was built so that planks could be laid on it and it could be used as a bridge for automobiles. Luckily it is preserved as a bike path. I had hoped to be able to walk it, but it was getting too late and I had a fair distance to go before I could find a reasonably priced motel room. www.midrivers.com/~fairview/bridges.html
CC BY-NC-ND 3.0 Don Barrett (aka DBs travels) Fairview, ND railroad bridge (0498)
Suggested groups:
Comments

Great capture, thank you for sharing with us at Historical & Architectural Gems
www.ipernity.com/group/332973
7 years ago. | Permalink