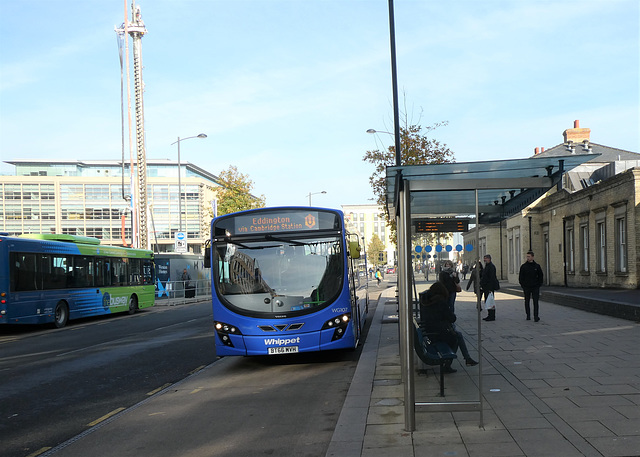 Wednesday 6 November 2019 (1138) – Whippet Coaches WG107 (BT66 MVH), a Wright Eclipse bodied Volvo B7RLE new in December 2016, seen in Station Place, Cambridge alongside the Railway Station. Despite the destination display it was heading towards Addenbrooke’s Hospital on the 1111 departure of service U (Universal) from Eddington.

This service which replaced the Uni4 service is sponsored by the University of Cambridge with assistance from North West Cambridge Development. From Eddington it travels via various academic sites and residential areas on the western side Cambridge then skirts the edge of the city centre before reaching the railway station.

Between the railway station and the Addenbrooke’s Hospital site (where there are more related academic locations) via the southern Busway. Whippet along with Stagecoach East were the initial operators on the longer northern Cambridge to St. Ives Busway but the company pulled out of that operation in early 2019. Service U saw their return to Busway operation albeit on a different section.
Suggested groups:
Comments