Latest posted Navigate on the map Photos with specific people Most appreciated Most viewed Most commented Search by keywords Search by date
See also... Berny's
favorite photos All the photos where
Berny appears 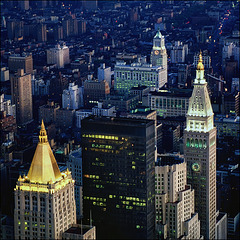 View from Empire State Building to "New York Life Building" (golden roof), "Merchandise Mart Building" (the black newer one), behind is the "Metropolitan Life North Building" (Art déco, built 1928-1950) and the "MetLife Tower" with the clock, which shows a time of 8:32 pm. - scanned slide, Minolta X700 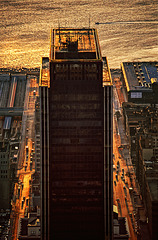 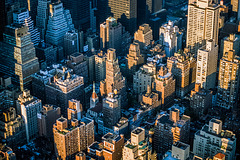 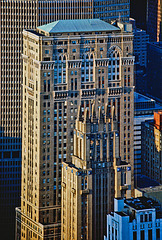 Lincoln Building was finished in 1930 in "renaissance revival" style, it has 55 floors and is 205.1 m tall. Materials are limestone and brick. The building in front of it is the "Lefcourt Colonial Building", built in 1929-1930, Art déco style, 45 floors, 164 m. Seen from Empire State Building - scanned slide, Minolta X700 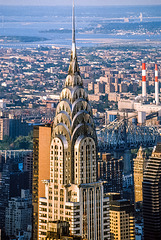 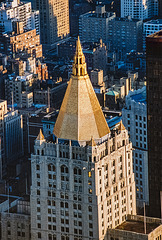 View from Empire State Building to "Stuyvesant Town-Peter Cooper Village", which is a large, post-World War II private residential development on the east side of Manhattan. The complex consists of 110 red brick apartment buildings stretching from First Avenue to Avenue C, between 14th and 23rd Streets. There are 11,250 apartments. Stuyvesant Town–Peter Cooper Village was planned, beginning in 1942, and opened its first building in 1947. It replaced the Gas House district of gas storage tanks. - scanned slide, Minolta X700 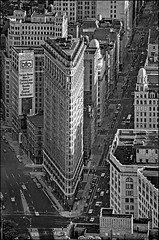 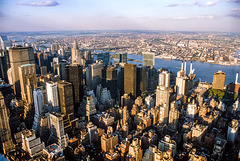 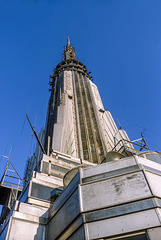 443.2 m above ground is the antenna's peak. Per the original plans, the Empire State Building's spire was intended to be an airship docking station. The 80th, 86th, and 102nd floors contain observatories. I visited the 86th floor observation deck back then, the higher one was closed for public. - scanned slide, Minolta X700 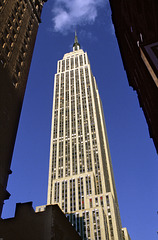 This is finally the last place I visited during my 1986 journey through the US. Some view of the top will follow to finish this travel report. The Empire State Building is a 102-story Art Deco skyscraper in Midtown Manhattan in New York City, United States. It was designed by Shreve, Lamb & Harmon and built from 1930 to 1931. Its name is derived from "Empire State", the nickname of the state of New York. The building has a roof height of 380 m and stands a total of 443.2 m tall, including its antenna. The Empire State Building stood as the world's tallest building until the construction of the World Trade Center in 1970. Following its collapse in 2001, the Empire State Building was again the city's tallest skyscraper until 2012 (!). As of 2020, the building is only the seventh-tallest building in New York City, but sure one of the most beautiful. - scanned slide, Minolta X700 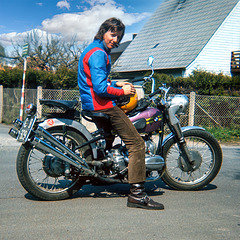 My first motorcycle, which I bought with 17 - my parents were not amused, a BMW R51 (1938). The photo was taken with my first camera, a Kodak Instamatic 100 (scanned slide). ► Kodak Instamatik ► Born to be wild

In the meantime the name PANAM is gone and the skyscraper is called "MetLife Building". It was built 1960-1963 with 58 floors and is 246.3 m tall. It used to have a rooftop helipad, however it was closed due to a fatal accident in 1977. The MetLife Building was the Pan Am Building from 1963 to 1981 when the Metropolitan Life Insurance Company purchased the building from Grand Central Buildings, Inc. The architectural stly is "brutalist". The old skyscraper in front of the PANAM ist the "Helmsley Building", built in 1929, 35 floors, 172.2 m. Architectural style is a mixture of Art déco, beaux arts and neo gothic. The view is from Park Avenue, looking NE to SW. scanned slide, Minolta X700 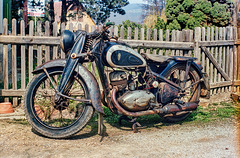 I made this photo in 1984, when I owned the bike, but never restored it. At that time I leased an old empty horse stable, where I stored about 24 classic unrestored, partly very rusty bikes. By the way, DKW means "DampfKraftWagen", later also "Des Knaben Wunsch" or "Das Kleine Wunder" ! - scanned slide, Minolta X700 HFF and a great weekend, my friends! Stay safe and healthy, wish you an early vaccination!
11626 photos in total
Jump to top