Ashgabat, Sculpture of Saparmurat Niyazov on the Top of Neutrality Monument 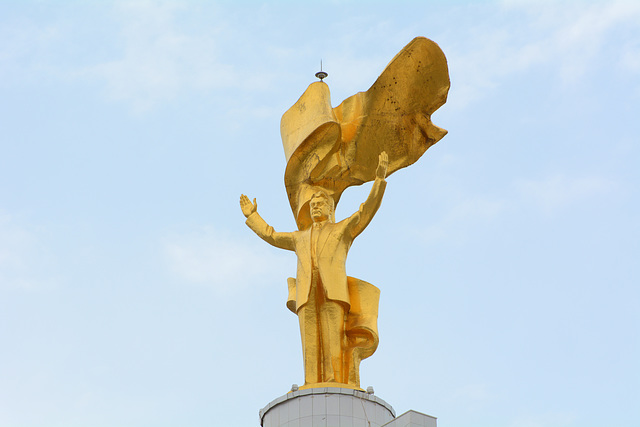 Saparmurat Niyazov - the first President of Independent Turkmenistan. Statue on the top of Neutrality Monument - The three-legged arch, which became known locally as "The Tripod", was 75 meters (246 ft) tall and was built in 1998 on the orders of Turkmenistan's President Saparmurat Niyazov to commemorate the country's official position of neutrality. It cost $12 million to construct. The monument was topped by a 12-meters (39 ft) tall gold-plated statue of Niyazov which rotated to always face the sun.
After the death of Saparmurat Niyazov, Arch was dismantled and moved as a Neutrality Monument to the southern part of Ashgabat, in the foothills of the Kopetdag. This action was completed by the 20th anniversary of independence of Turkmenistan. The height of the new monument, opened on December 12, 2011, was 95 meters, which is 20 meters higher than the former Arch.