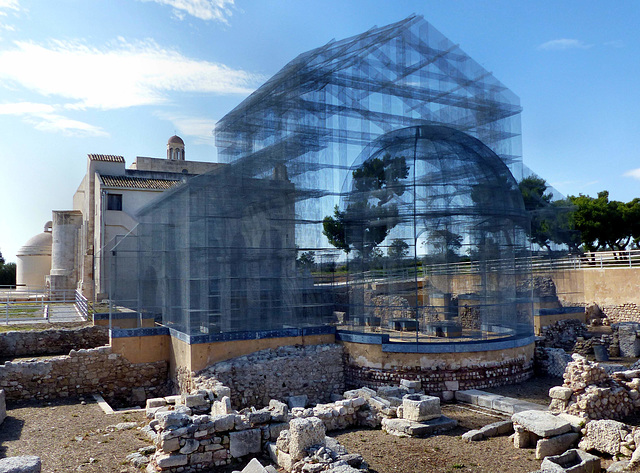 Santa Maria di Siponto is a former cathedral in the area of ancient Sipontum, a city abandoned in the Middle Ages and re-founded as Manfredonia. The church is the only remaining building of the former settlement.

The current church stands next to the remains of an early Christian basilica from the 6th century, which was probably built over an ancient Diana shrine. It may have been the baptistery or the atrium of the former basilica. It is certain that the old basilica was destroyed in an earthquake in 991. The reconstruction started around 1025. It was probably uncompleted when Pope Leo IX held a synod here in 1050. End of the 11th century another earthquake destroyed it again but it got rebuilt on a square plan and consecrated already in 1117. It consists of two apses on the southern and eastern walls, and a monumental portal with two side lions, facing the road.

When in 1223 a severe earthquake finally destroyed Siponto, the complete complex in its old form could not be restored. End of the 12th century a great transformation started. A floor was installed, creating two floors, the current upper church and the lower church, the crypt (that was locked!).

In 2016 young Italian artist Edoardo Tresoldi (*1986) "recreated" the lost cathedral out of wire mesh. The translucent sculpture erected over the old foundations is about 14 meters high.
Suggested groups:
Comments