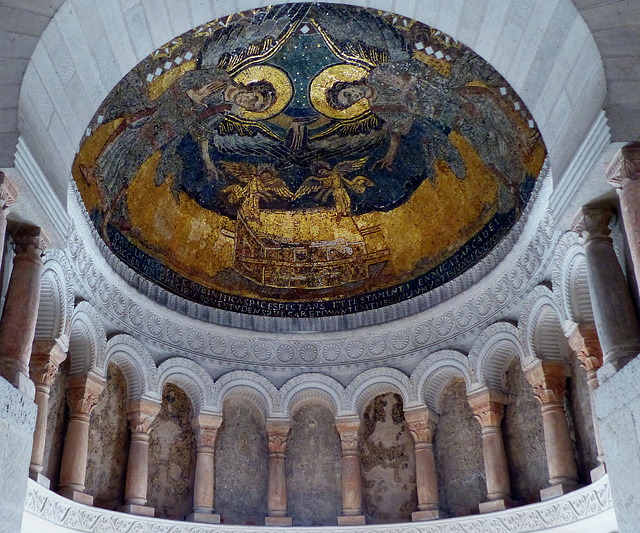 This small church in a Germigny des Pres (pop. 750), was built to serve as the private chapel of Bishop Theodulf of Orléans, who had a sumptuous "villa" here.

Theodulf, one of Charlemagne's important counselors, had written the Libri Carolini (aka "Opus Caroli regis contra synodum") at Charles´ request, before Charlemagne appointed him Bishop of Orléans as well as abbot of Fleury Abbey (= "St-Benoit-sur-Loire"), just 7kms east.

All the remains of the residence are gone. The "oratorium", that has many parallels to Charlemagne´s palace chapel in Aachen ("Aix-la-Chapelle"), is the last remaining structure. It was consecrated on January 3, 806.

In 817, three years after Charlemagne had died, Theodulf was accused of treason and imprisoned in Angers until he died in 821.

The church became part of a priory and was used by the parish since the 13th century, when the western wall and apse were removed to make way for a traditional Latin nave. That Romanesque nave was in turn replaced by the present larger one in the 15th or 16th century.

The renovation, that was completed end of the 19th century, was not done with much "respect": much of the Carolingian masonry was replaced, two flanking apsidioles were removed, the crossing tower was shortened, most capitals were replaced. But this is still a wonderful carolingian chapel and one of the oldest still existing in France.

This magnificent apse mosaic was hidden under whitewash (what may have saved it during the French Revolution). It got discovered in 1840, after local kids played with coloured glass cubes - of unknown origin.

This great work of medieval art has no parallel in France and was surely done by an artist from the East. At the time this mosaic was created, the controvery over Iconoclasm was still going on in the Byzantine Empire. All forms of religious imagery were banned in the East - and many gifted artists fled to the West. Maybe the artist, who worked here, was one of them.


The mosaic, made of glass and colored stone, is symmetrical, centering on the Ark of the Covenant. In a small area of starry sky the Hand of God descends. Two angels flank the scene. They enclose the sky with their wings and look down at the Ark. Two smaller angels stand atop the Ark, reaching down to it. The Ark of the Covenant is shown as a gold box with side rails for carrying.

Along the bottom of the mosaic is a Latin text, which reads:

"As you gaze upon the holy propitiatorium and Cherubim, beholder, and see the shimmering of the Ark of God's covenant, perceiving these things, and prepared to beset the Thunderer with prayers, add, I beg you, Theodulf's name to your invocations." (transation from Wikpedia)

It is just like the art in the San Vitale basilica in Ravenna...
6 years ago. | Permalink

You are right,
Ravenna (once part of the Byzantine Empire) influenced Aachen - and from there this small oratory. And of course the Byzantine style came to Rome (eg "Santa Maria Maggiore") and to Venice..
6 years ago. | Permalink