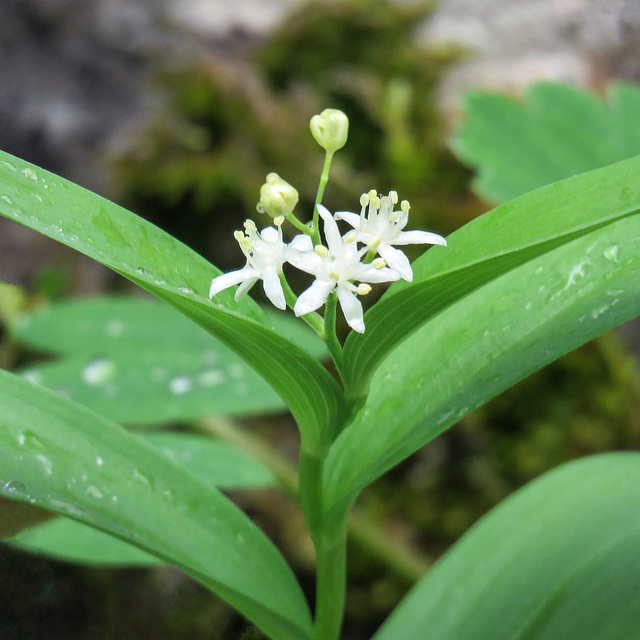 For the next few days, I will be posting photos from an outing on Sunday, 23 June 2019, and also a few of my usual local birds taken on the way home from this event. The map feature is not working yet again, though images were showing up on it for a day or two. Now it is back to being faulty yet again, and I don't mean just the mystery name. Causes such a hassle when I post Texas photos that need to be put on the map, so Texas photos will have to wait.

That day, 23 June, was a fun day, despite the fact that it was raining a good part of the time. It was the annual Ghost Watershed Alliance walk, which ends with a delicious fundraiser BBQ at noon. This botany walk, through the forest and on top of the cliff along the Ghost River, is led by our main Naturalist, Gus Yaki, and hosted by Erik Butters. I can't remember how many of these events I have been to over the years, but certainly a few.

I like to drive myself out there, as I then have the choice to drive somewhere else when all is finished, if I have any energy left. Exactly what I did, enjoying myself photographing Mountain Bluebirds, a Snipe, and a Bobolink which was unfortunately perched on a high wire. Better than nothing, though.

It was a very early start to the day yesterday, as I wanted to allow about two hours' travel time. There has been some flooding in certain areas and I wasn't sure if there might be a road or two blocked off. As it turned out, I reached the meeting place in plenty of time, so drove a bit further to see what I could find. Just an attractive, old wagon that I have seen before, and some adorable, new calves in one of the fields.
Suggested groups:
Comments