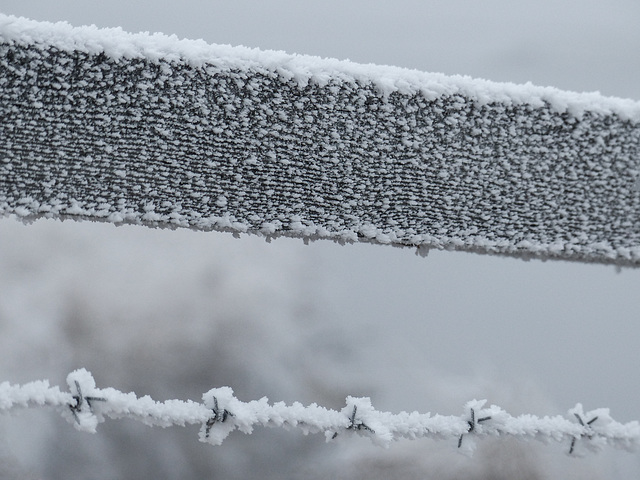 This photo was taken on 16 December 2014, which was the annual Audubon Christmas Bird Count for the town of High River. This town is SE of Calgary, roughly half an hour's drive from the southern edge of Calgary. My small group travelled in two cars, 8 people in total, and we covered the SE quadrant of the Count circle.

Below, I will add the report compiled by our leader, Gus Yaki. As usual, there were several of these sightings listed that I, myself, did not see. I ended up with poor photos of most of the things that I did see. The day was absolutely beautiful, but the light was even worse than I had realized. The amazing hoar frost, that covered everything, surprisingly lasted pretty well the whole day - usually, it lasts only a very short time. So, even though the light wasn't good for photos, the hoar frost beauty stayed with us all day long - just breathtaking. For our drive down to High River, we had fog which, in patches, was quite thick. Wondered if we would see anything at all when we reached our area, ha. It was cold and damp, as well as foggy. In addition to that, some of the birds, such as the three Snowy Owls (I only saw two of them) were SO far away, there was no chance for photos except just for the record. Only 35 species were seen in the total for the complete Count circle.

Of course, as always happens, I just had to take photos of anything else that caught my eye, including several barns, cloud formations, farm cats, an old truck, scenery and so on.

At one of our stops, we were looking in the bushes/shrubs at the edge of a farm, where a Northern Saw-whet Owl had been sighted last Christmas Count. No luck with an owl, but one of the birders spotted a male Merlin very high up on a power pole. A short while later, it was spotted just down the road, perched on a fence post. Such a beautiful bird - but such lousy light!

We had finished our count by 5:00 pm, by which time it was, of course, completely dark. A few of us stayed for the delicious pot luck supper, mainly provided by the generous birding people down in High River. Lorrie and John gave a slide show of their recent trip to Africa. So many great shots of beautiful bird species that I have never seen. Thanks, Lorrie and John, for spending time going through all your slides at home and choosing a lovely selection for us. Many thanks, too, for driving Shirley and myself all day long!