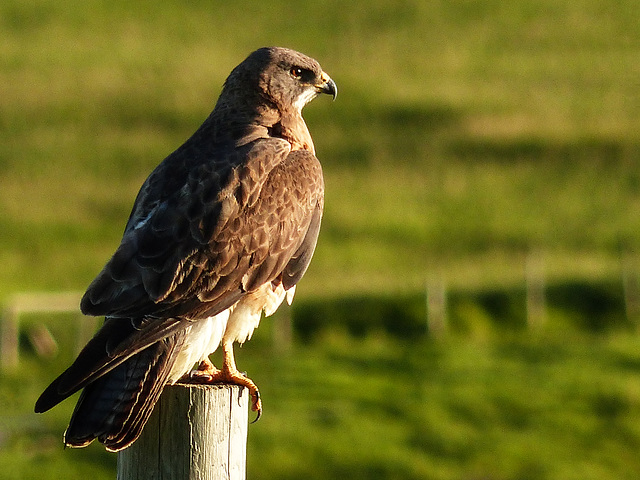 This Swainson's Hawk was hanging around a farm when I went for a drive SW of the city, on 26 June 2013. I'd noticed it in the area previously, but never close enough for a photo. Wish the sun was shining that brightly today, instead of the totally overcast sky.

Just read the results of the 17th annual Great Backyard Bird Count (Feb 14 to 17, 2014), when scientists and citizens around the world joined forces for the Great Backyard Bird Count. The GBBC is a joint project of the Cornell Lab of Ornithology and the National Audubon Society with partner Bird Studies Canada and support from sponsor Wild Birds Unlimited. A couple of interesting facts are:

"It was another exciting, record-breaking year for the Great Backyard Bird Count. The final 2014 GBBC results are in! Participants in 135 countries around the globe submitted more than 144,000 checklists. Canada made a stellar contribution with 13,458 checklists.

The Northern Cardinal appeared on more checklists than any other bird, while the Red-winged Blackbird was the most numerous species, with more than 1.6 million individuals counted." From BirdStudiesCanada.

"Last year’s bird count went beyond North America for the first time and shattered records for the number of bird species that were identified. According to the Cornell Lab of Ornithology, people from 111 countries and territories from all seven continents recorded more than 34.5 million birds, representing almost 4,000 species, in just four days." From CBC News.

Too bad that people around the world can't get together like this when it comes to politics, not just birding! Well done, everyone!
Suggested groups:
Comments