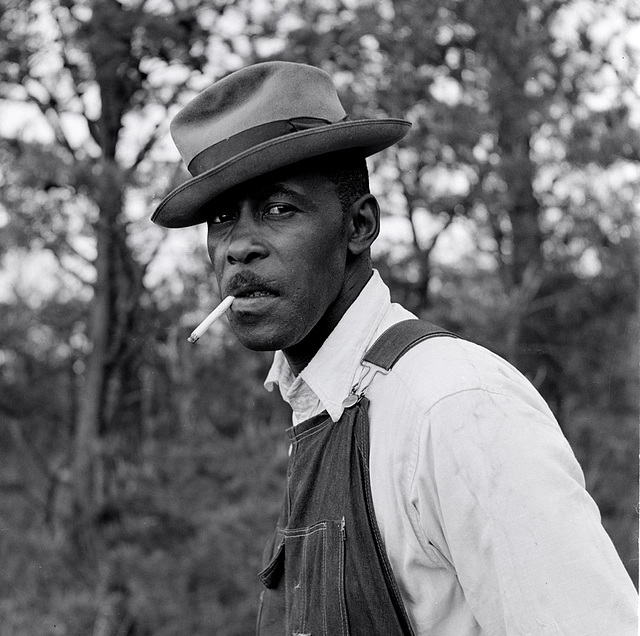 Under segregation, a person (of color) could be accused of “reckless eyeballing,” meaning an improper look at a white person, presumed to have sexual intent. Matt Ingram (a black tenant farmer) was convicted of this offense in North Carolina in 1951. [John Zimmerman, photographer (1953)]

Matt Ingram was among the last convicted under this framework, in a 1951 case made notorious by civil rights activists in North Carolina. A seventeen-year-old white woman named Willa Jean Boswell testified that she was scared when her neighbor Ingram looked at her from a distance of about 65 feet. Prosecutors demanded a conviction of assault with intent to rape that was reduced to assault on a female by the judge, leading to a two-year sentence. He was defended by a white lawyer, Ernest Frederick Upchurch, Sr.

At the appeal in Superior Court, the judge instructed the jury that Ingram was guilty if he used “intentional threats or menace of violence such as looking at a person in a leering manner, that is, in some sort of sly or threatening or suggestive manner…he causes another to reasonably apprehend imminent danger” The all-white jury again returned a conviction, leading to a six-month sentence of labor on the roads, suspended for five years.

However, after pressure from the NAACP and African-American media like Ebony, the state supreme court vacated the conviction because: “it cannot be said that a pedestrian may be assaulted by a look, however frightening, from a person riding in an automobile some distance away. …He may have looked with lustful eyes but there was the absence of any overt act.” The look alone no longer represented grounds for conviction. People continued to be convicted of assault if there was “reasonable apprehension” of danger, such as a body movement, movement in the direction of the person under observation and so on.