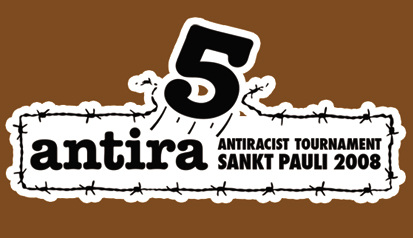 www.antira-stpauli.org
Friday, 23rd of May 2008
Arrival of the first teams at the tournament’s site at the Kollaustrasse
From 11.30a.m. different offers
11.30a.m.: Departure of the bus to visit “former concentration camp memorial of Neuengamme”, “Bullenuser Damm” – a school where children were held and murdered by fascists and an alternative harbour trip. (Guided tours in different languages depending of your registration)
Return to the training ground

8p.m.: Introduction of the new transnational antiracist network Alerta! in the clubhouse of training ground
From 8p.m.: Get-Together-Party at the training ground with Djs from St. Pauli and Prague

Saturday, 24th of May 2008
10 a.m.: Start of the first group games (5 players plus goalkeeper)
From 11 a.m. during the whole day: Groups’ videos at the tent, presentations, discussions, films, fotos, exhibitions and stalls at the site

1 to 3p.m.: Break of football games. Lecture with a time witness: Antje Kosemund about Euthanasie during the nazi time (with translation into English)

From 8 p.m.: Common tour with public transport to concert venue, Hafenklang Exil, Neue Große Bergstraße, Hamburg-Altona.
From 9 p.m.: Antira concert at the Hafenklang Exil in Hamburg-Altona, featuring three bands and DJ. The bands are: Toastar (Reggae/Ska from Hamburg), Redkicks (Punk from Metz/France) and Egotronic (Electropunk from Berlin).
(The „Metro-Bus“ line 5 leaves at U-Hoheluftbruecke every 20 mins. From there you take the Underground U3 (yellow line) to Sternschanze and from there S-Bahn to Altona. During the whole night, as well as all subway and S-Bahn lines from Altona to Sternschanze and Hoheluftbruecke.

Sunday, 25th of May 2008
10 a.m.: Starting time of the second day of the tournament, beginning of the final round

From 11 a.m. during the whole day: Groups’ videos at the tent, presentations, discussions, films, fotos, exhibitions and stalls at the site

5 p.m.: Lecture about “Nationalism, Racism, Antisemitism and violence in Ukrainian football” (with translation into English)

Time will be announced: Report of Easton Cowgirls about their project in palestine