anatomical moonbathing the maenad big giant (because) bones of the forest sweet lips fuerte, frio, picante good mail day victorian surgeon removing a rare "decorative love… she's halving a cow mail art for kerri mail art for gina like white on rice strange sunset dead fish blowout small postcard for richard ammonite woman pauses to clear her syphon "rocky raccoon checked into his room... envelope for danielle fraktious (back) fraktious (front) mail art for mike untitled 120916 I need a happy mask work in progress envelope for carroll the welcoming darkness below a gentle ride for the hobo clown she's a happy plinth! would hans arp say yes? yellow science mania envelope for AJ out of the deep past saw you at the show last night (back) when you leave this world dreaming of someone like jackson the dumpster will provide saw you at the show last night I am haunted by thoughts of eternity the loneliness of the transatlantic courier 2 nudes + 2 screws + 4 tomatoes + (Gilbert & Georg… mae west #2: blood in the water ontogeny annabel lee, april 2012 envelope for trish (front & back) what if spring were static?

the ties that bind 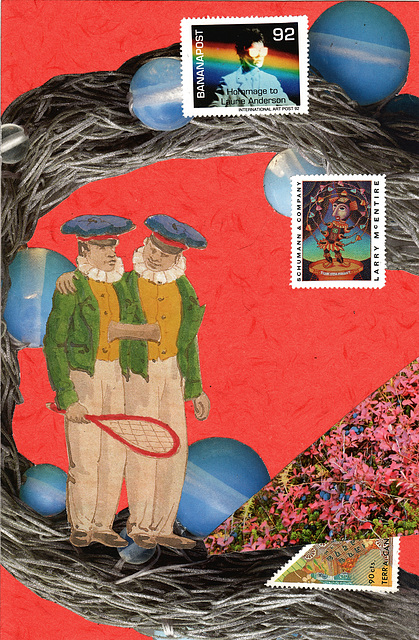 Cut-paper collage postcard for Danielle. That funny little watercolor of Chang & Eng, the original Siamese twins, really caught my eye: their clothes and hats, not to mention the racket, include every hue in the rainbow except orange. So I added orange (a lovely textured Japanese silk paper that didn't scan well) and stirred in some other stuff.

Fascinating fact about Chang & Eng: They wanted to be separated, because they had different personalities and habits; but doctors always said there must be something vital in the band of tissue between them, so the operation would be too risky. After they died, an autopsy was done. It turned out that modern surgical techniques would have easily allowed them to be separated.

To be quite frank about it, this postcard isn't getting much love from me, The color of the orange paper didn't scan right: it's less peachy in the original. But even before that, I was having strong mixed feelings about how the rainbow colors play off each other. And the grey fibers with the blue balls (a MoMA necklace) are givin' me the creeps. I decided that Chang & Eng need a way to escape from the postcard—that's why I added the triangle with pink flowers. But they haven't escaped yet! =sigh=
Suggested groups:
Comments