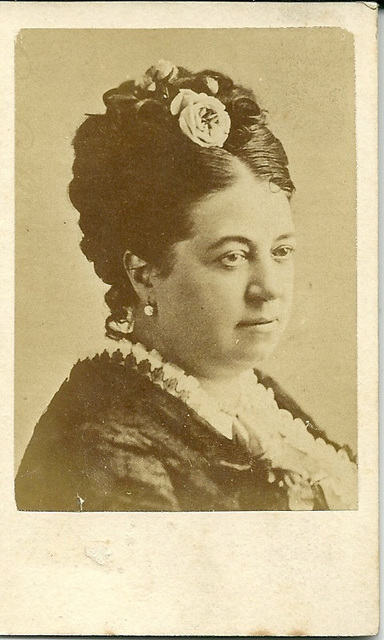 She studied at the Hamburg Schmidt educators and then in Vienna with Dellessie, Babing and H.Proch. In 1848 she made her debut at the municipal theater (opera house) of Hamburg as Irma in "Le Ma ¢ on" ("Mason and Schlosser") by Auber. 1849 there had particular success in the title role of Donizetti's "Lucrezia Borgia". 1850-53 she was engaged at the Opera House of Frankfurt aM and sang during this time the theater of Brünn (Brno). On 20.01.1851 she performed in Frankfurt in the world premiere of Lortzings "Opera Rehearsal" on the eve of the death of the composer. 1853-59 Member of the Vienna Court Opera. In 1858 she appeared for the first time in London, and though at Her Majesty's Theatre as Valentine in "Les Huguenots" by Meyerbeer. Since 1859 she performed until her death in London, where she moved, and both at Her Majesty's Theatre as the Drury Lane Theatre, often also at the Covent Garden Opera. She appeared in a large number of important premieres in London with: 1865 at Her Majesty's Theatre in the title role in the opera "Medea" by Cherubini, 1859 at the Drury Lane Theatre as Elena in "I Vespri Siciliani" by Verdi, 1861 at the Lyceum Theatre London as Amelia in Verdi's "Un Ballo in Maschera", in 1867 at Her Majesty's Theatre as Leonora in "La forza del destino" by Verdi, 1863 in the same house as Marguerite in "Faust" by Gounod, 1864 again there in the title role of Gounod's "Mireille "and as Mistress Ford in Nicolai's" Merry Wives of Windsor "(in Italian). She sang constantly in the English metropolis, apart from a stint in Paris in 1863 and an extensive and very successful North American tour 1875-76. Other highlights in her wide-ranging repertoire were the Norma, Donna Anna in "Don Giovanni", the Lucrezia Borgia and Agathe in "Der Freischütz" by Weber. She sang a technically difficult role as Semiramide in Rossini's opera, an old role as the Fides in Meyerbeer's "Le A Prophet" as well as the only Wagner role Ortrud in "Lohengrin". Under the 5/26/1864 offered her Richard Wagner in a letter to take over the Isolde in his opera "Tristan and Isolde" and was willing to take some cuts in the score, but did not materialize this project. She could not decide which to take Sieglinde in "Die Walküre" also. Even as a concert and oratorio singer Therese Tietjens enjoyed the highest reputation. In 1876 she gave her last concert in London, the 1877 one still followed in Dublin. On several occasions she sang in court concerts in front of Queen Victoria, who was very fond of her. She had a rich educated, powerful voice, which ranged from c to d three-painted, and their ability to express it as well as their admired virtuoso agility. At the beginning of her career in England they represented a very attractive, elegant stage presence, but was subsequently very corpulent. In September 1877 she suffered during a performance of "Lucrezia Borgia" in which she sang the title role on the stage of Her Majesty's Theatre a serious collapse attack and died of cancer two months later.
Suggested groups:
Comments