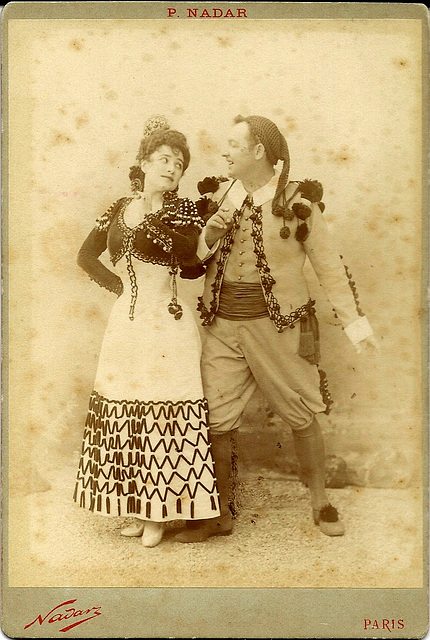 Lucie Bertrand (Berthet)
1866
Belguim Soprano
studied until 1892 at the Conservatoire National de Paris. She was immediately committed to the Paris Grand Opera, where she debuted in 1892 as Ophélie in 'Hamlet' by A.Thomas. ; on 02.19.1897 she performed at the Grand Opera in the world premiere of the opera 'Messidor' of A.Bruneau as Hélène with, in 1895 in the 'La Montagne noire' of Augusta Holmès. In the years of their engagement, she sang at the Grand Opera roles such as Juliette in 'Roméo et Juliette' by Gounod, the Marguerite in his' Faust ', the title role in' Thaïs' by Massenet, the Marguerite de Valois in Meyerbeer's "Huguenots' , the title roles in 'Gwendoline' and 'Briseis' of E.Chabrier (1899 in the Paris premiere of this opera), Gilda in 'Rigoletto', the Zerlina in Don Giovanni and the Elsa in 'Lohengrin'.

JEAN BARTET b
1862
French Baritone
Jean-Arriet Bartet was, went through his vocal training at the Paris Conservatoire, where he was a pupil of Barbot and Giraudet. In 1893 he debuted at once at the Grand Opéra Paris as Nelusco in Meyerbeer's "Africaine '. He remained until (about) 1910 where the commitment and went to the Opera in a variety of roles: as Nevers in the 'Huguenots' by Meyerbeer, as Valentin in' Faust 'by Gounod and as Grand-Prêtre in' Samson et Dalila 'by Saint-Saëns, as William Tell by Rossini and as Alphonse in La Favorite' by Donizetti, as Masetto in Don Giovanni and as Amonasro in 'Aida', as Gunther in 'Sigurd' of Reyer and as Mathias in ' messidor 'of A.Bruneau, as Telramund in' Lohengrin ', as Kurvenal in' Tristan ', as Kothner in the' Meistersinger 'and as Wotan in the' Valkyrie '. He also worked at the Grand Opéra in several world premieres, including in 'La Cloche du Rhin' of S.Rousseau (1898) and in 'Lancelot' of V.Joncières (1900), 1899 in the premiere of 'Briseis' of E .Chabrier. In addition to his work at the Paris Opéra, he also had a successful career at the major opera houses in the French provinces
Suggested groups:
Comments