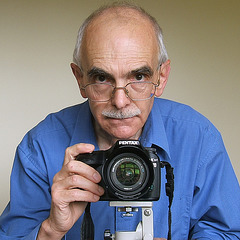 I am a busy grandparent who tries to find time for making pictures and loves looking at and learning from other people's pictures.

My own pictures seem to be the way I express my relationship with the world, images of the things I see and the way I see them.

Processing is done using a desktop PC with a 23" monitor configured to 120 candelas, white point 6500k and gamma 2.2. Software is SilkyPix and Affinity Photo software, and an Epson Perfection V750 scanner.

Music, photography and reading. Looking at pictures and things in the world. I like to be out in the fresh air.