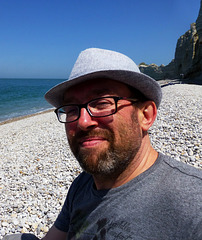 Living in the far west of Germany, where I was born in the mid 1960s.

Was on Panoramio for a couple of years, although under a different name. Quit for two reasons - one was the way Google handled it, the other was simply it was getting too time consuming after a while.

Here, I will upload pictures about three times a week (or so is my intention...), always in sets of 25 to 35 pictures. I will do so in chronological order, beginning with the year 2003 - this way, it will take me about a year until I can start posting pictures taken just recently.

Many of my pictures were taken on vacations, some on business trips, and quite a lot also on excursions near where I live. And a few years ago - but after leaving Panoramio - I took on hiking, which is another source of pictures.

Before 2005, all pictures were taken with an old analogue Pentax, so what you see here from these years are scans.

Every now and then, I will post pictures of myself - to your and my amusement in the face of the circumstance that while we think the world is ever changing, it is in fact us who change much much more...

Hope you enjoy your visits.

Translate into English
Jump to top