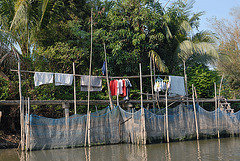 Morning Glory plants behind the net

Morning Glory also called water spinach and it is known to have been grown in Thailand for many hundred years and has not yet escaped cultivation. It is every where available in Thailand on all village markets. The rack above the water plants is simple used as a laundry drier. 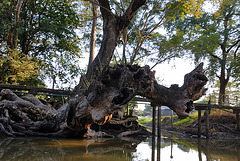 Very bizarre roots formations can be seen at the side of the Khlong. It does not need much fantasy to recognize soon a monster or a dragon. 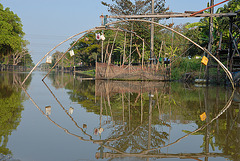 Fishing surely is the main occupation of all the residents living at the Khlong side. The freshwater fish out of this Khlong is very much liked by the Bangkokian people. 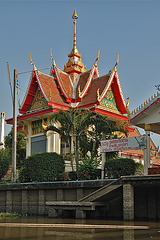 In the center of the muslim urban area is also the area of a buddhist temple. The sign at the entrance warns about violating the strict ban of fishing (2,000 Baht punishment if violating the fishing ban). This is a temple area and the fish are belong to the temple. Buddhist and muslim societies often live side on side, the muslims aren't original Thais but much more integrated than in most European countries. 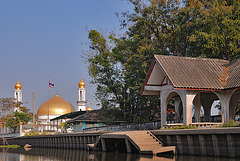 The chosen name Darul Muttaqien refers to the pious people who are ever aware of God the Almighty. The jetty at the Khlong side looks like is not much used anymore. 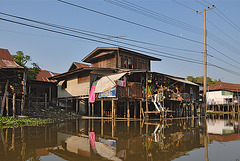 Inhabitation along the Khlong

The surface of the water can be reached two meters higher, from the dry to the rainy season. 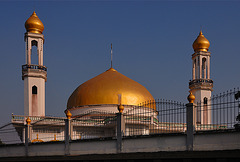 The style is traditional Thai with Chinese and Malay influences. The most outstanding feature are the golden cupolas on the top of the minarets and the dome. 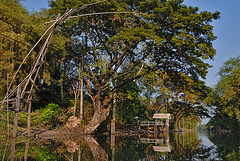 When we came closer to the final destination Nong Chok village we could enjoy beautiful views along the canal bank. Here the outrage of logging operations hasn't reached yet. 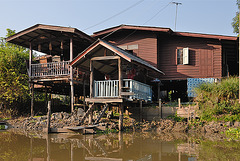 Simple estate riparian on the Khlong 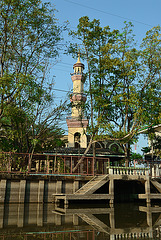 One more mosque close to the Khlong side. In the area along Saen Saeb Khlong people count more than thirty mosques. 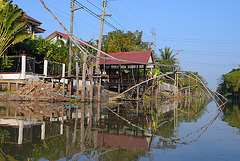 Some properties lie very idyllic beside the canal, with own gangplanks for boat landing and big fishing net racks. 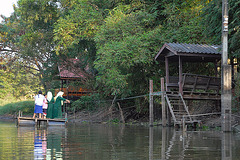 School girls on the way home have to cross the Khlong with a self made pontoon, pulling themselves along a rope. 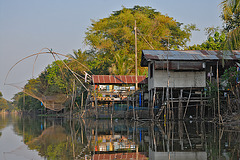 All Thai houses have a small spirit house in the front garden or on a place where the shadow of the house does not fall on the spirit house. The spirit house is normally in the form of a miniature house or temple, and is mounted on a pillar or on a dais. But not so on muslim houses, the Islam forbids to believe in ghosts and the muslims don't fix spirit houses as its normally Thai tradition to have one. Inconsistent with the believe only in Allah, all muslim people I know and I met are scared about ghosts in their mind and live the whole life with the trespass number one which says not to believe in something else than Allah. 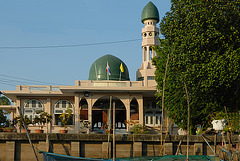 Darunna Im Mosque and no worshipper

Before we entered Nong Chok village, the place we had to return home, the Mullah shouted out for "Lamat" - (people come to pray). But I did not see a Mullah, perhaps a tape is playing - and I did not see anyone running to the mosque for praying. The place looked all empty (?). 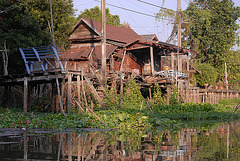 Rotten premises along the Khlong, an evidence of many removals of former residents who find a new existence downtown Bangkok to increase the income. 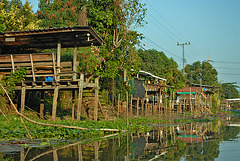 Other simple estates at the canal side

Sometimes we had the impression that some areas look extinct, no one seen in the huts and houses. The former boat pier seemed unused for a long time and all the necessary infrastructure seems to cut off. Just some hundreds meters further at the city limit of Nong Chok village life starts for new. 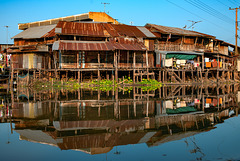 We reached the final destination Nong Chok village. Nong Chok is a district and a village with a long time history. The district was established as an amphoe in 1897 during King Chulalongkorn (Rama V) period. The original settlers were muslims relocated from cities in southern Thailand. In 1902, it became an amphoe of the newly setup Min Buri Province. Due to economic hardship during 1930-31, Min Buri Province was disbanded in 1931 and Nong Chok was transferred to Chachoengsao Province. However the administration was moved under Bangkok the next year due to inconveniece of travel between Nong Chok and Chachoengsao. Today about 75 percent of the population remains Muslims while 22 percent are buddhists. The name Nong Chok means water lettuce swamp. 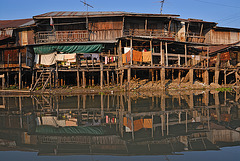 Narrow hootches at the Khlong side in Nong Chok look to be condemned, but are inhabited by inhabitant for many years. The local people got accustom with the annually handicap of flooding and the millions of mosquitos in that area. Hootch is the name for a typical Vietnamese dwelling in which rural farmers or peasants live. I also use this expression in thailand.
45 items in total
Jump to top