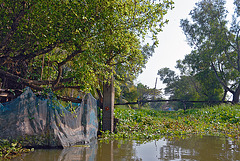 The first kilometer on a side Khlong went deep through floating fields of water hyacinths. Its difficult to steer the boat in the right gully and no trunk or brunch in the water forces the boat to stop. 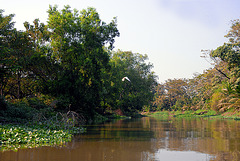 Khlong Si the side canal of Khlong Saen Saeb

Left and right on channels bank many kinds of birds, mostly cranes, have found an ideal breeding ground. No roisterous long tail speedboats run this Khlongs like at common scenes on Khlongs in downtown Bangkok. 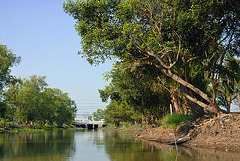 Khlong Si means "beautiful canal" and is a side canal to the Khlong Saen Saeb where we were going to. 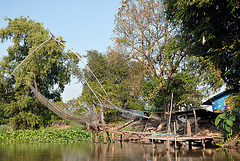 Along the side canals of Khlong Saen Saeb the housing seems to be much poorer than along the main canal. Here at the canal side of Khlong Si in Ampoe Minburi. 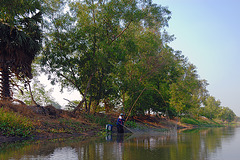 The Thai word "khlong" is not limited to artificial canals; also many smaller rivers are referred to as khlong followed by the name of the stream. Khlong Si was dug by the residents. 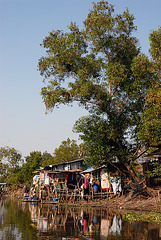 Slum huts at the Khlong Si side

This picture is common when you are going along on the side channels. Many poor slum cottages to be seen at the Khlong side waiting for the next flood which soon will come for sure. 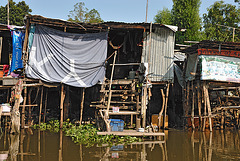 Poor housing at the Khlong Si water side

Some huts are built only for a season until the next flood or the worker has his job at the nearby factory. But the term has traditionally referred to housing areas that were once relatively affluent but which deteriorated as the original dwellers moved on to newer and better parts of the city, 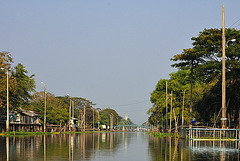 We turned to the right side into the main canal Khlong Saen Saeb. No other boats were seen on the water. The canal isn't used for boating anymore just local citizen use the Khlong for fishing. 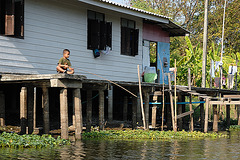 A boy is trying to catch a catfish out of the Khlong. Some areas are strict covered with a prohibition of fishing due the lack of freshwater fish still live in this polluted Khlong water. 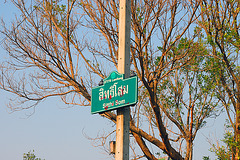 Nameplate from a side Khlong

Like roadsigns in the city, every side canal has its name, an official plate shows the name in two languages. 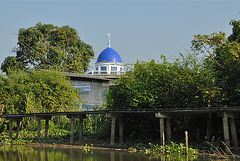 Cupola of the Addharolumutdin Mosque

Left and right the Khlong there are a lot of mosques, along the Khlong beside the footbridges are fixed loudspeakers shouting out the voice from the next mullah ordering the residents to come to pray in the mosque. The Khlong once was dug with the work of thousands of Khmer muslims and in the meantime after five generations the muslims still colonize the Khlongs area. 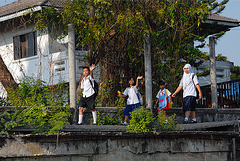 Muslim pupil girls today are dressed with an headscarf, when I come to this place thirty years ago the Muslim women and girls seldom wear like this. Something has changed and it seems that the islamic dress code has turned to be more uniformed. The girl in the middle does wear only school dress. 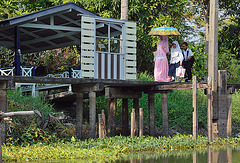 Muslim girls and their school uniform 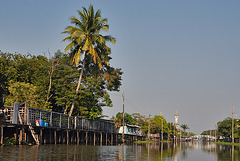 Saen Saeb got an unused canal

Once - a long time ago - the canal was the most important route for commerce and for the water transport for soldiers and weapons to Cambodia. At the present transporting on the road is much faster and easier, so the canal got useless, no commercial boats go the Khlong anymore. I almost can say that we were the only boat on the water for all this 25 km, sometimes a self made ferry crossed the Khlong to bring the townsfolk from one to the other side of the canal. 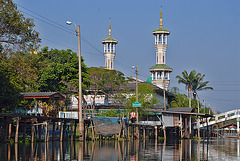 Most muslim people still remain beside the Khlong since the canal was built. During our Khlong-tour to the final point Nong Chok we passed some mosques and muslim colonies with all the necessary facilities like islamic schools, hospitals and cemeteries. 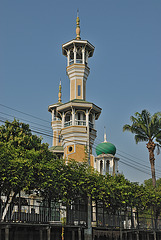 Minarets of the Salimunyinam Mosque

While we were passing the mosque we thought a female high voice shout out from the minaret ordering the believers to come and pray. A female Mullah lady? As we came closer the minaret we discovered that it was a young boy aged perhaps 10 years to exercise oneself the callout for the muslim community. 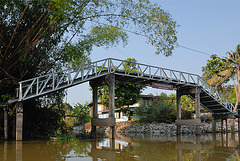 Footbridge along the Khlong

The pedestrian bridge over the side canal called Khlong Pracha Ruam Chai. 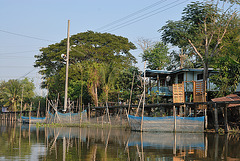 Resident housings beside the footbridge

Residents use the Khlong for fishing and crowing vegetable. The nets are a protection against snakes and monitors (big varans).
45 items in total
Jump to top