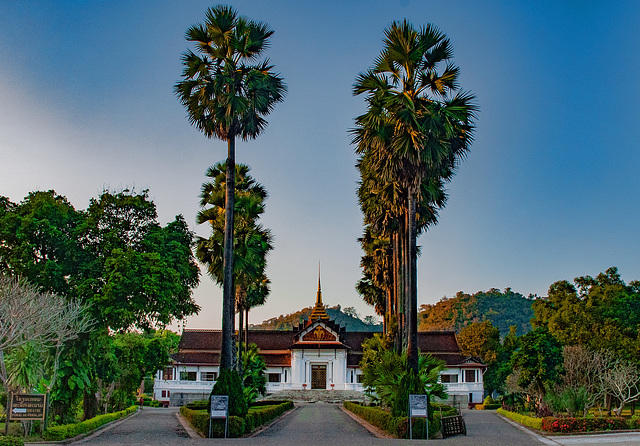 Built by the French colonial government for King Sisavangvong between 1904 and 1909 on the foundations of a much older palace building, the former Royal Palace was taken over by the revolutionary government in 1975 and reopened to the public as a national museum on 13 March 1976. Located in the centre of town opposite Mount Phousi, the building features a blend of French and Lao architectural styles. The long front wing houses the king's reception hall to the right of the main entrance and the reception area for the chief secretary to the left. Decorated with murals depicting scenes of everyday life in the city executed by a French artist in the 1930s, the king's reception room contains busts and paintings of past Lao monarchs. To the left of the main entrance is the reception area for the chief secretary, which now displays gifts from various heads of state to the Lao monarchy, and beyond this the queen's reception room. Connecting the reception wing with the residential wing is the throne hall. In addition to the throne of the king and queen, on display is the king's howdah or elephant chair. Glass cases contain many crystal Buddha images recovered in 1914 from the collapsed chedi of That Makmo in the grounds of Wat Wisun. The walls of the throne room are decorated with cut mirrored tile mosaics, which may also be seen on the rear walls of the sim at Wat Xieng Thong. The royal apartments have been preserved more or less as they were when occupied by the king and queen. The include bedrooms and the dining room, as well as a music room displaying Lao classical instruments and masks. In the compound of the royal palace is a large ornate pavilion, opened in 2003, which houses the sacred pha bang standing Buddha image.