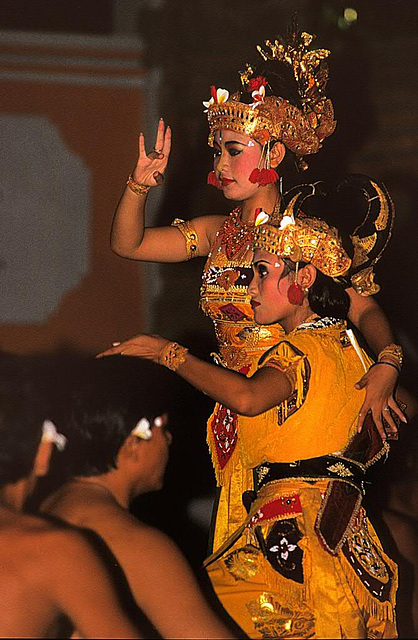 The Kecak Dance tells the Indian story of Ramayana. Rama, a warrior and rightful hier to the throne of Ayodya, is exiled with his wife Sita to a faraway desert. There, an evil king spies Sita, falls in love with her, and sends a golden deer to lure Rama away. Sita is captured, and Rama rounds up his armies to defeat those of the evil king and rescue her. Rama is the man in green dancing in the center of the circle, the golden deer is in yellow in the back.
What makes the Kecak such a fascinating dance to watch are the fifty or so men in the checkered pants. They are both the choir and the props, providing the music for the story in a series of constant vocal chants that change with the mood of the actors. They don't sit still, either, they wave their arms to simulate fire, and reposition themselves around the stage to represent wind and fire, prison cells, and unseen hand of protection from the gods.

The dance is played in five acts and lasts roughly 45 minutes. Weekly (in some places daily) performances of the Kecak abound around the island, but the most well-known Kecak theater is in the town of Batubulan just north of the Balinese capital of Denpasar. The dance company provides transportation for a nominal fee to and from the resort.
Attending a Kecak recital is a must for any visitor to Bali. It is a wondrous experience, and a window into the musical and artistic culture that make the Balinese a special people.
The choreography of the Kecak dance was created in 1930s by Walter Spies, a German painter and musician who became deeply interested in the ritual while living in Bali.
Suggested groups:
Comments