Young girl Legong dancing Young model in the marigold field Portrait of a Bali girl Barong dance in Desa Sembung Mayun praying at Kuningan Muslim girls and women on Bali The daily pray inside the private temple Roofing in Tenganan Penataran Temple in Penglipuran Four beauties in Penglipuran Pura Tanah Lot Outrigger boats at Desa Bunutan Komang and Komang Gamelan player at the saron barung Anom in the mask of Celuluk Dancing lesson in Pemuteran Young model for portrait picture Komang in Pura Taman Beji Giriya Portrait capture from Suzan Two boys in their Balinese dress Suzan at the Pagerwesi festival My home in Sembung on Bali Welcome back to Bali I must take care my mother ... and me Wira 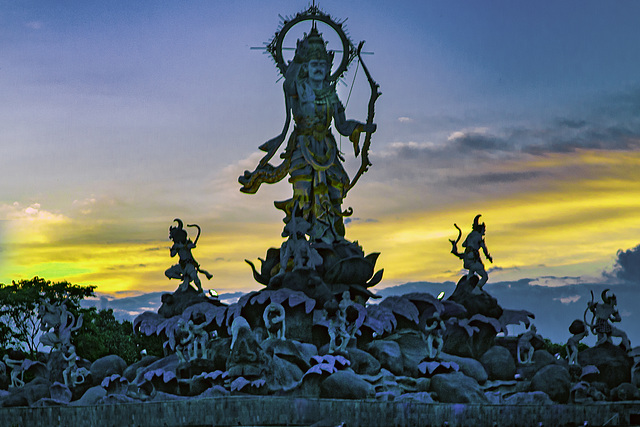 For a few months now Denpasar has had a great, monumental symbol, the Titi Banda statue.
The construction of this statue was an innovation in embellishing the cityscape of Denpasar. The statue tells stories from the Ramayana epic, namely the story of Rama, in which he defeated the "Titi Banda Bridge" in the middle of the world with the help of a group of monkeys to get to his beloved Sita.
The colored lighting is not an exaggeration, the blue glow seems almost kitsch for the western opinion.