Arriving Xining railway station on the dot Xining Station Plaza Children's playground in Xining Xining Peoples Park Children paradise in Xining Little girl has fun in a big plastic bulb Xining around the Public Park Playing Diabolo in the Namsan Park A kite flying over the Namsan Park in Xining Xining People's Park Xining People's Park Xining People's Park called Renmin Gongyuan Ourselves in Xining Xining skyline behind the Public Park Diane, our Chinese friend in Xining New building constructions every where in Xining Salama und Diane, our friend in Xining Residential district with shopping center Xining downtown Xining Jianguo St First view in the early morning ... We enjoy the food in the train coach Inside the dining coach Headstream of the Changjiang River (Yangtze River) Late in the afternoon Along the Tongtian River Bizarre rock strata near Tanggula town Tanggula Mountain range Along the Tanggula mountain range Closer view to the Tanggula Mountain The first runlet of the Yangtze River One more view to the snow fields and glaciers The highway goes beside the train track Every seconds an different amazing view to the mou… Reach the Tanggula Mountain Pass 5,231 Meters Info display inside the train coach Close to the Tanggula Snow Mountain Tonggula Mountain Far view to the Snow Mountains Vista to the landscape near Thangla Ri The high mountans in the background Erosion protection every where Climbing more and more higher and higher Climbing to the high Tanggula Mountains Amdo Station Erosion protection Nagqu River near Amdo View out the window to the Cuona Lake Cuona Lake Cuona Lake Close ride beside the Cuona Lake Cuona Lake near Amdo Near Amdo Impressive cloud formations Small pool beside the track The remain of workers temporary accommodations Snow just in a bit higher altitude No one on the highway Riverbed of Nam Cho Unending foothills in front of the high mountains The floor inside along the coach Dangxiong 4,293 m, clean and empty railwaystation Salama and Albin inside the compartment A look outside the window The track goes along the Tsang Po valley View over the grain fields to the highway Along the Zang Po river Our group is boarding the train The railway goes mostly on piles The tickets for a sleeping car The trail on the piles The map of the railway from Lhasa to Xining

Wolfgang's photos • See all of them?
ACTIONS

Photos with the keyword: Qinghai 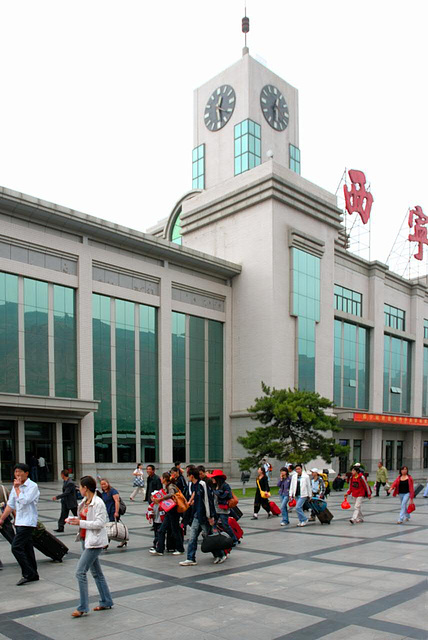 Xining is located on the eastern edge of Qinghai-Tibet Plateau and the upper reaches of Huangshui River. It is the political, economic, scientific and technological, cultural and traffic center of Qinghai Province with an average altitude of over 2200 meters. The activities of human beings in this region can be traced to 2,100 years ago. During the Western and Eastern Han Dynasties, owing to its developing agriculture, Xining was paid more attention due to its economic and martial significance. As well as being the important hinge between the central plains and the western part of China in ancient time, Xining was the most common passing channel of the famous Silk Road. Until now, it is still the only road by which to enter the hinterland of the Qinghai-Tibet Plateau.
At present, five districts, three counties and a national economic and technological development zone are under the administration of the local government. With a population of more than two million, Xining is the first city on the upper reaches of the Yellow River to achieve a population into the millions. There are about 37 nationalities living here, including Han, Hui, Tu and Tibetan. The local traditions and customs are influenced by these distinctive nationalities, in particular the Hui (Muslim) and Tibetan group.
Xining is also called the Summer Resort Capital of China for its cool summer. The region also provides a number of attractions making a visit to the area well worth considering. The scenery of the Qinghai Lake, situated within Xining, provides an escape from fervent cities and allows you to experience beautiful natural sceneries. The Birds Island, situated on the northwest of Qinghai Lake, is waiting to present you with an extensive array of birds. To the southwest of Xining, is the birthplace of the founder of the Gelugpa Sect; an important Tibetan Buddhist monastery, Kumbum was built there. Dongguan Mosque, one of the biggest mosques in northern China.
Suggested groups:
Comments