Climbing to the high Tanggula Mountains Climbing more and more higher and higher Erosion protection every where The high mountans in the background Vista to the landscape near Thangla Ri Far view to the Snow Mountains Tonggula Mountain Close to the Tanggula Snow Mountain Info display inside the train coach Reach the Tanggula Mountain Pass 5,231 Meters Every seconds an different amazing view to the mou… The highway goes beside the train track One more view to the snow fields and glaciers The first runlet of the Yangtze River Closer view to the Tanggula Mountain Along the Tanggula mountain range Tanggula Mountain range Bizarre rock strata near Tanggula town Along the Tongtian River Late in the afternoon Headstream of the Changjiang River (Yangtze River) Inside the dining coach We enjoy the food in the train coach Erosion protection Nagqu River near Amdo View out the window to the Cuona Lake Cuona Lake Cuona Lake Close ride beside the Cuona Lake Cuona Lake near Amdo Near Amdo Impressive cloud formations Small pool beside the track The remain of workers temporary accommodations Snow just in a bit higher altitude No one on the highway Riverbed of Nam Cho Unending foothills in front of the high mountains The floor inside along the coach Dangxiong 4,293 m, clean and empty railwaystation Salama and Albin inside the compartment A look outside the window The track goes along the Tsang Po valley Modern tourist bus runs beside the Tibet train The Tsang Po river also called Yarlung Zangbo Rive… 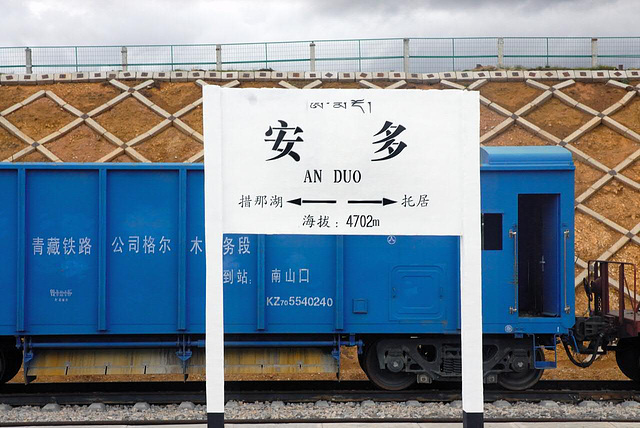 Amdo, written also Ando or An Duo is the last station before the high Tanggula Pass.
The city was and is the home of many important Tibetan Buddhist monks (or lamas), scholars who had a major influence on both politics and religious development of Tibet .

Forty-four railway stations are to be built, among them Tanggula Mountain railway station, at 5,068 m the world's highest (Cóndor station, at 4,786 m, on the Rio Mulatos-Potosí line, Bolivia, and La Galera station at 4,777 m, in Peru, being the next highest). The Qingzang Railway project involved more than 20,000 workers and over 6,000 pieces of industrial equipment, and is considered one of China's major accomplishments of the 21st century.
Suggested groups:
Comments

thanks for the invitation to the group "matrix of modern times"
9 years ago. | Permalink