Wat That Phanom in Nakhon Phanom In the yard of That Phanom Stone formations in the Pha Thaem National Park Prehistoric paintings in the Pha Thaem National Pa… Sunset at the Maenam Mun riverside Maenam Song See Pedestrian bridge across the Maenam Mun The Little Brother "Tii Lek" at the Chong Mek mark… Offer of used sport shoes at the market in Chong M… The market in Chong Mek At the bank of the Sirindhorn Dam Sunset at the Sirindhorn dam House in the Kantaralak village Liang and her husband Neng and Satit Driving home with the Minotauros Our host lady and the marketer woman Guest host and landlady for many years Cleaning coriander plants Boy in the village Kantaralak In the village called Kantaralak Sunset in the province Sri Saket Dry paddy field on the way to Sri Saket Picnic underneath the holy Bodhi Tree At the Mekong riverside near Nakhon Phanom The gate to the temple complex Wat Ban Nam Kam in Nakhon Phanom Mekong in the evening light The Mekong near Nakhon Phanom Gate to the temple complex The Mun river flows into the Mekong Indochina market in Mukdahan Mahout and his elephant called Lamduan That Phanom temple gable Vendor for spices, herbs and natural medicines Phra That Bun Paun, Buddha statue under weather pr… A stupa in the sunset First Thai–Lao Friendship Bridge Mekong with low water level caused by reckless Chi… Reeds swayed by the wind in the sunset Beach at the dam bank Svartifoss (The Black Waterfall) Beside the highway no. 1 Climbing on the lava hills The Hekla volcano and its eruption history 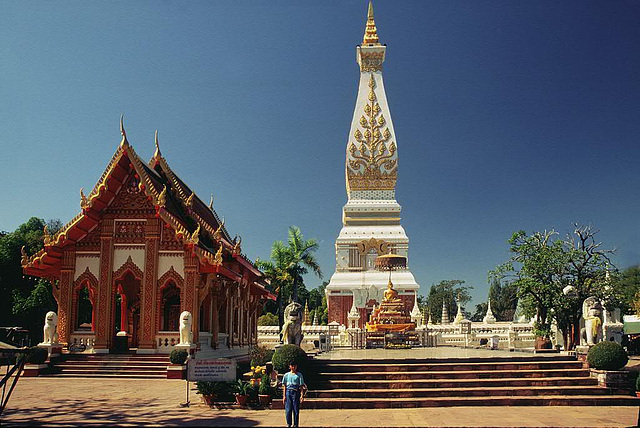 A collection of stories known as the That Phanom Shrine Chronicles tell that the first shrine was built shortly after the Buddha's demise. Archaeologists, however, date the earliest structures to between the sixth and tenth centuries AD, with the present form of the temple being established by the Lao kings of Vientiane in the fifteenth or sixteenth century. The centerpiece of the temple is a 57 meter tall That, or Lao style Chedi, decorated with 110 kilograms of gold. The Chedi is known as a popular ‘wish-fulfilling place’ and has a curious ritual whose origins are lost in time. Pilgrims will first purchase a small bird held captive in a finely woven bamboo cage. Carrying the caged bird with them while walking round the temple, the pilgrims will pray at various Buddha images and pre-Buddhist spirit-stones. This period of prayer may last from five minutes to more than an hour. Finally, the bird is freed to the skies in the hopes that its release will speed the pilgrim’s prayers to heaven. While pilgrims visit the shrine of That Phanom throughout the year, during the seven-day period of the annual festival held in late January or early February the temple complex is alive with the energy of many thousands.
Translate into English
Suggested groups:
Comments