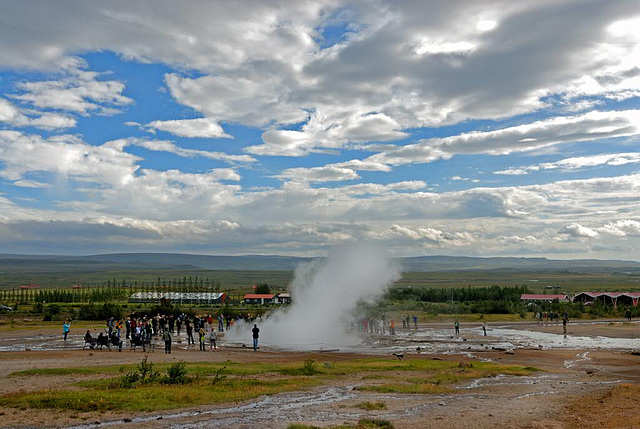 The geothermal area which is named after the famous Great Geysir is a high temperature geothermal area. This term is used over geothermal systems that are within the zone of active rifting and volcanism, and the temperature in the subsurface system is higher than 200°C at less than 1 km depth. The temperature of the hot springs is up to 100°C and some are constantly boiling - if the temperature at depth rises above boiling the hot springs erupt which means that they are geysers. Geysir’s eruption occurs when boiling water within the geyser, trapped by cooler water above it, explodes, forcing its way to the surface. In more detail, geysers erupt because the thermal water ascending throuh their channels boils at some depth below the surface.
As the water boils it converts into steam, and as the steam occupies far greater volume than water the water above in the channel is thrown high up into the air. At about 23 m depth in the Geysir pipe the water is at 120°C temperature. It is in equilibrium with the pressuere of the water above in the pipe, i.e. the weight of the water above keeps the boiling down.
At a depth of around 16 m, the temperature of the water sometimes rises above boiling, seen as increased turbulence at the surface.
This turbulence (boiling) can increase to the point where the water above in the pipe is lifted slightly, and a chain reaction starts - the pressure decreases making further boiling possible and the water flashes into steam, resulting in an eruption in Geysir. The boiling now extends down into the pipe, throwing more water into the air. When all the water in the pipe has been thrown away the water coming from depth changes immediately into steam and a steam eruption follows the water eruption, whith accompanying noise. The water-phase lasts for few minutes and the steam-phase considerably longer, graduately dying out and the cycle starts again.
Suggested groups:
Comments