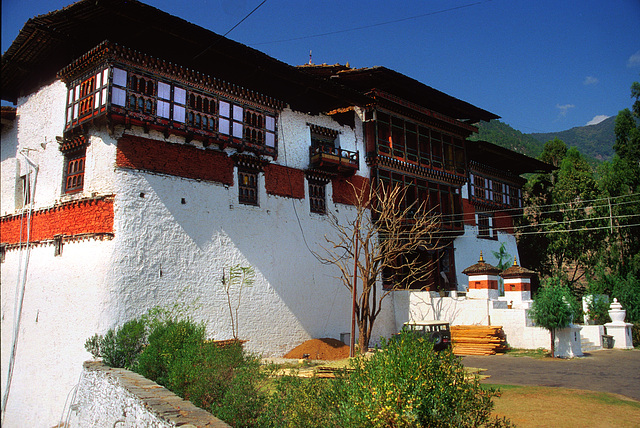 The name is said to have been given by the Shabdrung Ngawang Namgyal who was searching for the best location for a dzong to prevent incursions from the south. At the chosen spot the Shabdrung encountered a boy named Wangdi playing beside the river and hence named the dzong “Wangdi’s Palace”.

A terrible fire destroyed the Dzong on 24th of June 2012 Bhutanese Prime Minister Jigmi Thinley has promised that the historic 17th Century Wangdue Phodrang temple - destroyed by fire over the weekend - will be rebuilt.

Mr Thinley said the destruction of the temple "had pierced our hearts". Most of the temple's artefacts were saved however, reports say.

It is not known what caused the blaze which has reduced the temple to ashes.

Wangdue Phodrang is regarded as an important gateway to the remote districts of eastern Bhutan.

The prime minister said that the temple would be rebuilt in the same way that the Tiger's Lair temple - destroyed by fire in 1998 - was rebuilt five years later.

"We the people of Bhutan have not lost but gained another opportunity to renew and further enrich our proud heritage," Mr Thinley said in his message on Monday.

When the fire broke out on Sunday, hundreds of people rushed to the scene of the blaze and watched in tears as it went up in flames.

The height of the building and its cliff-top location - despite its proximity to the two rivers - made it difficult to get enough water to the site to extinguish the flames.

Kuensel newspaper reported that 14 fire engines had attended the blaze. Parts of the building were still smouldering late on Monday night.

Officials say the fire may have started from an electrical short circuit. Another theory is that it may have been caused by candle-lit lamps used throughout the temple - which is located in a notoriously windy area.

Kuensel editor Phuntsho Wangdi told the BBC that most of the priceless Buddhist artefacts at the temple were rescued by the emergency services and members of the public.
Suggested groups:
Comments

Beautifully captured. Thank you for the info.
1.000+ Visits
5 years ago. | Permalink