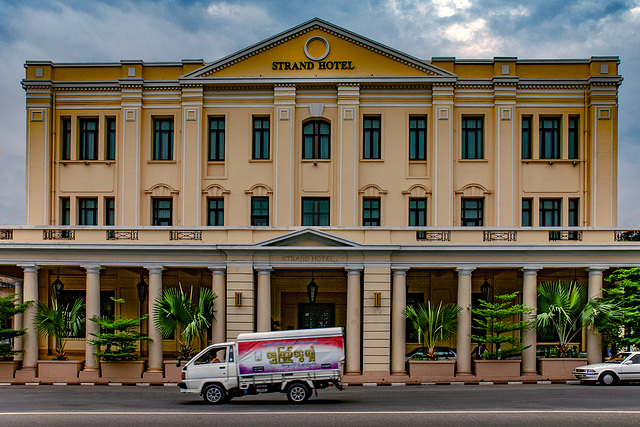 A back view to the Hotel we spent the honeymoon in Februar 1981.

History of the hotel:
During the colonial period, the Strand was one of the most luxurious hotels in the British Empire with a clientele of exclusively whites.
In 1941, during World War II, following Japanese occupation of Burma, the hotel was used to quarter Japanese troops.
The following year, the Strand's ownership was transferred to the Imperial Hotel in Tokyo. For the first time in 1945, since the Strand's establishment, the Burmese became part of the hotel's clientele.
After Burma achieved independence in 1948, the hotel was neglected by post-colonial governments. In 1962, Strand Hotel was bought by the Burma Economic Development Corporation, which poorly maintained the hotel.
After the 1988 coup d'état, the Strand was sold in 1989 to Bernard Pe Win, a Burmese businessman, who formed an alliance with Adrian Zecha and a group of investors who formed the Strand Hotel International. It has since been renovated extensively, and is now owned and operated by General Hotel Management.
The Strand reopened in 1995 as an all-suite, top-of-the range boutique hotel. Its teak and marble floors, mahogany furniture, and canopied beds complement original pieces, like period bathroom fixtures. But unlike the other grand old hotels in the region, the Strand's restoration remained true to its architectural past, and it has no new wing, and no swimming pool or tennis courts.