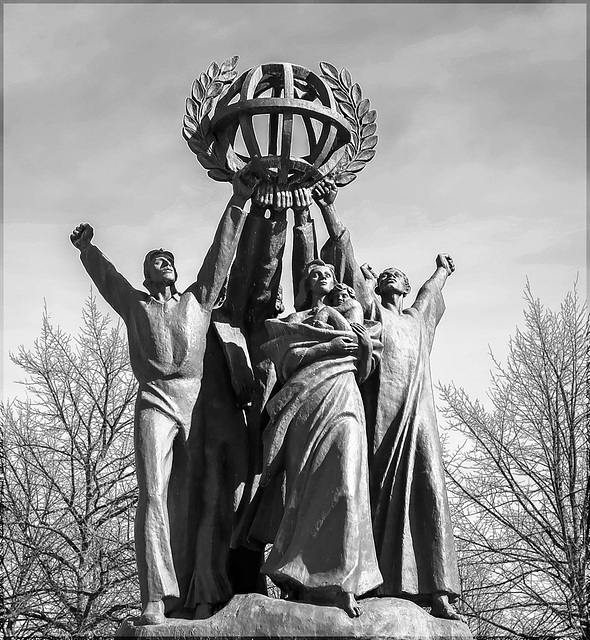 The work `World Peace', donated by the City of Moscow to the City of Helsinki, was unveiled on January 14, 1990. The donation was a part of the Cities' friendship and cultural exchange programme. Helsinki's gift to Moscow was Antti Neuvonen's sculpture `Friendship of the people' which was placed in a park specifically designed for donated sculptures. Kirjuhin's work is a good example of Soviet Socialist Realism. It comprises five figures representing the inhabitants of the five continents. The figures, supporting a globe decorated by foliage, are participating in a demonstration, fists raised in defence of peace. At the unveiling, Helsinki's Lord Mayor Raimo Ilaskivi noted in his speech that while the work is powerful and meaningful, it has caused much controversy.

Nice, .....you can see a bit the sovietic style
5 months ago. | Permalink
Wierd Folkersma club
has replied to Annemarie club

It has caused much controversy, for sure not my favourite, but interesting.
5 months ago. | Permalink

A fab statue!
5 months ago. | Permalink

Socialistic Realism ! Like how you presented this really awful statue !
5 months ago. | Permalink

Mono suits the statue! It may be rather ugly and controversial but it certainly doesn't leave anyone indifferent;-)
5 months ago. | Permalink

I can understand the controversy Wierd. I'm sure it cause quite a stir and lot of conversation. Well taken in spite of the feelings it has aroused.
5 months ago. | Permalink