Using the AlphaSmart as a USB keyboard 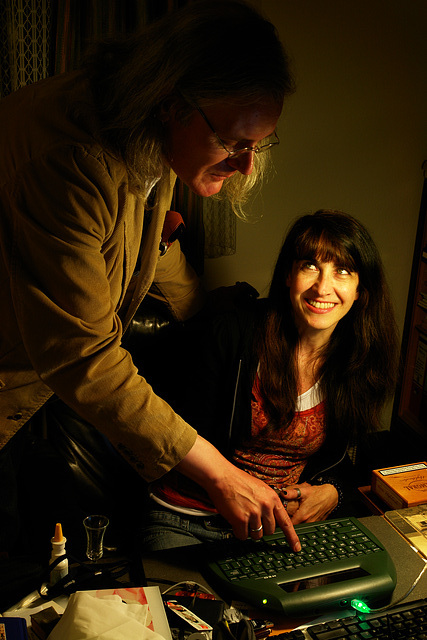 Ah, those grateful eyes, when the AlphaSmart veteran masterfully detects the Y-key on his Neo/US... Is it just my male chauvinism, or do they really say: "You're so CLEVER!"?

Imagine someone has lived in Germany for a long, long time. No wonder a German keyboard is attached to his trusty iMac, but that doesn't matter to him as he's got used to it.
Then, all of a sudden, an American guest appears. She'd like to use his computer to check and answer her e-mails, and that's fine with him (however severe, he's not inhuman).
She starts typing, but something seems to be wrong, and she can't Z Y...

Thank God, there's an American AlphaSmart Neo in the house, with all the characters in place. It easily connects to the Mac via a USB cable. This did the trick, and surely made her day...

(Picture taken for the AlphaSmart Group on Flickr)
Suggested groups:
6 comments - The latest ones

LOL LOL LOL KEES....it uploaded on my page too!!!! but that's kinda cool!!!
14 years ago. | Permalink
Kees club
has replied to Sherry ~ Rebujito

"she can't Z Y" - genius! :D But... wait: Is it just the geek aspect of my nature or the smart-ass (no, I'm far from being alpha smart, trust me...): Couldn't have choosing a different keyboard layout done the trick? Yeah... I think, I've answered my own question: Smartass speaking up... and now shutting up :-P
14 years ago. | Permalink
Kees club
has replied to renovatio06

“Genius” is a big word, and hardly applies to me, but me being a text rather than a picture guy, the photo actually developed from that wordplay. ;-)

Changing the keyboard layout would do, of course, if you’re a 100% touch typist; you’ll get in trouble, when you’re only 90%... I can’t really say how many percent Sherry is. I have no doubt, however, that she’s at least 90% better than me!
14 years ago. | Permalink
Kees club
has replied to %name%

Thanks again, Nigel! I rather like the picture too, but certainly not because I’m in it!

I think cameras new on the market handle low-light conditions much better than my Sony. There’s always a big danger of color noise, so I use the lowest sensitivity (ISO 160) whenever I can. That will reduce it quite well, but you’ll need a tripod (as here) or a steady hand –and a steady motif!
14 years ago. | Permalink