next >
< previous
/
Close
Albums Album Photos See on the map Add a comment Most appreciated Most viewed Most commented
Since 1956, Batemans Bay has had a lifting bridge across the Clyde River for the Princes Highway which follows the coast from Sydney to Melbourne. While lifting bridges were once common, particularly in NSW, this is the last such still operating, going up daily for the tourist boat, then again on its return. Needless to say, that causes quite a bit of traffic disruption, particularly in holiday periods.

Main roads on the NSW coast are being upgraded, I'd like to think for the benefit of the general community, but I feel it's largely to facilitate the movement of more and larger trucks. And our old bridge, being narrow, tends to limit their movements. So it has to go!

The bridge is being replaced with a large multi-laned concrete bridge which will be sufficiently high for the tourist boat to pass beneath. It will be built in a standardised style to other such bridges built recently on NSW main roads.

With that thought in mind, I've decided to make this album to record the "old" bridge and the replacement process.
Since 1956, Batemans Bay has had a lifting bridge across the Clyde River for the Princes Highway which follows the coast from Sydney to Melbourne. While lifting bridges were once common, particularly in NSW, this is the last such still operating, going up daily for the tourist boat, then again on its return. Needless to say, that causes quite a bit of traffic disruption, particularly in holiday …  (read more)
View on map
OpenStreetMap Center Close 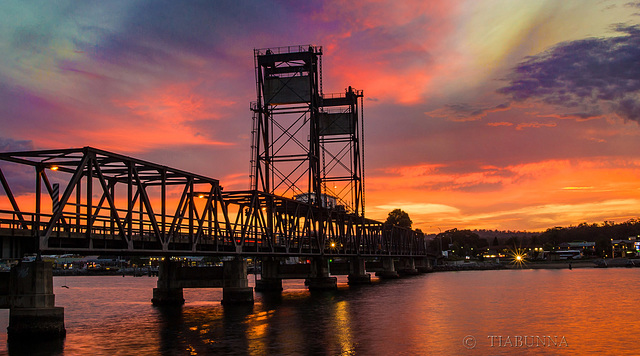 An image of the old lifting bridge that I've realised I hadn't previously posted here. The new bridge, now under construction, will run from about where this was taken to between the old bridge and the bright light across the river (which is near where the previous images, also in PiPs, were taken).. Best viewed large. 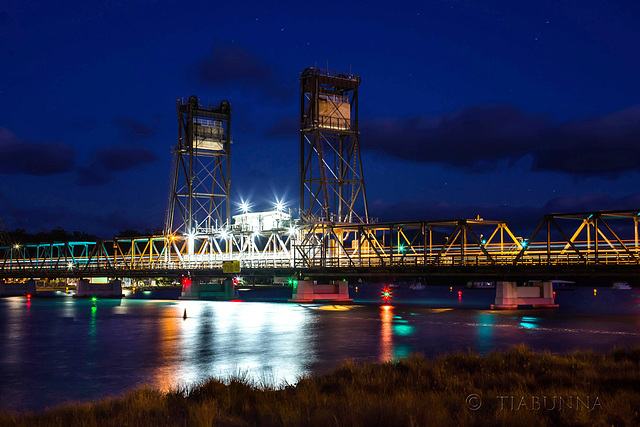 This image of the old bridge was taken about half an hour before the arrival of the first construction barge to begin work on the new bridge. It is currently not possible to access this spot on the river bank and the new bridge construction works have totally changed the scene. Best viewed large on black. Explored. 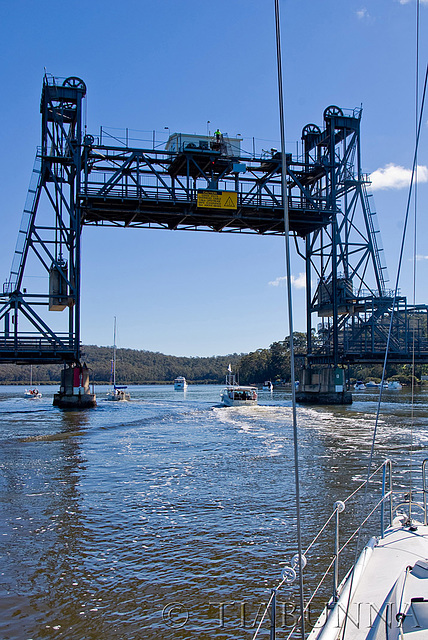 Very few lift bridges remain in operation in Australia. Batemans Bay has probably the largest. In normal use it rises only a small distance for a tourist boat, but very occasionally it needs to rise to full height, as on this day when the local yacht club had a run up river. A note shows the operator. 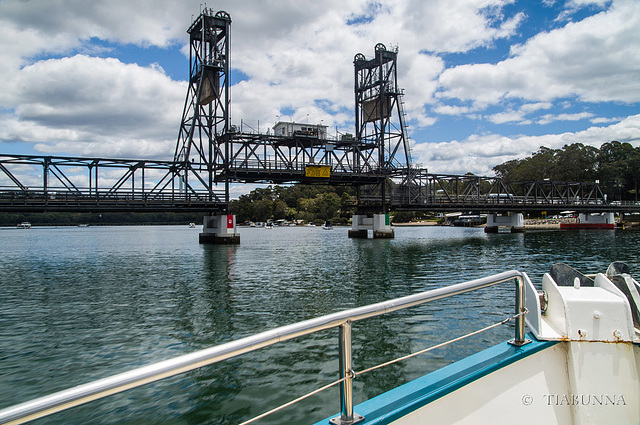 One of the last operational lifting bridges in Australia, the Batemans Bay bridge recently celebrated its 60th anniversary. It opens daily for the upstream trip of the local tourist boat (which I was on for this shot). Needless to say, this creates substantial traffic jams on the main road, especially in the holiday season! Best viewed large on black. HFF, everyone. ** Additional note, as this type of bridge seems unfamiliar to most. The central portion of the bridge is balanced by the two large (concrete) counterweights, which descend as the bridge span rises. There are traffic lights to stop the road traffic (which can be seen on the side spans). 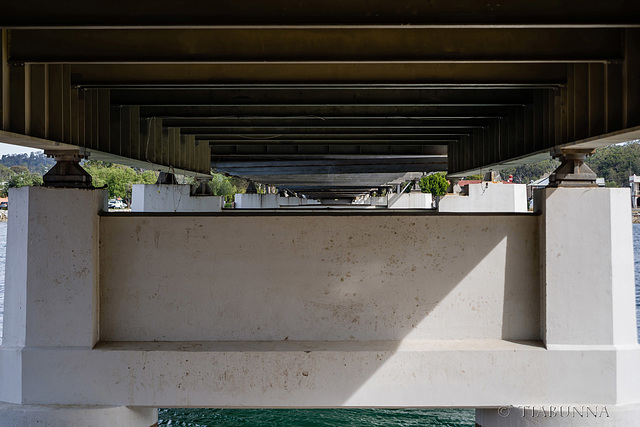 The old bridge across our local river is nearing the end of its life. One of the last working lifting bridges in Australia (see note) it is due to be replaced by a 'standardised' concrete bridge next year. I thought it time to get some more images while it's there. 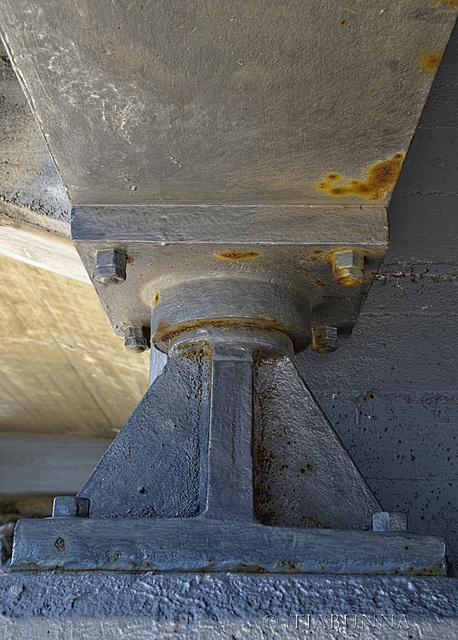 This steel post fitting has been holding up its corner of the old bridge since it was built. Best viewed large on black. 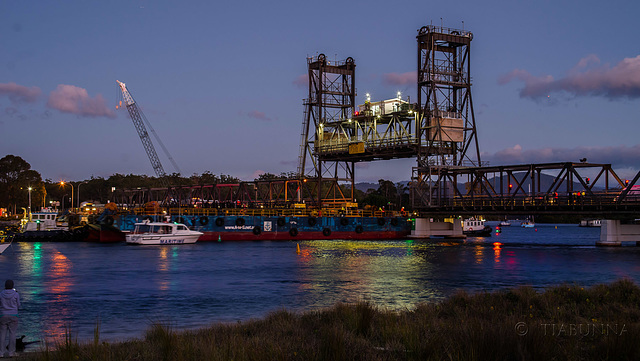 Far from my Norway series, in the past few days the "big event" for our little town was the arrival of a 3300 tonne barge which will assist with the construction of a large new concrete bridge to replace our current lifting bridge, AFAIK the last such operating in Australia. The barge had to be brought across the Clyde River bar at high tide (about 0300 that day) then under the current bridge at first light. The barge is about half the size of a football field and had well below a metre of clearance from the pylons on either side! View large on black. Explored. 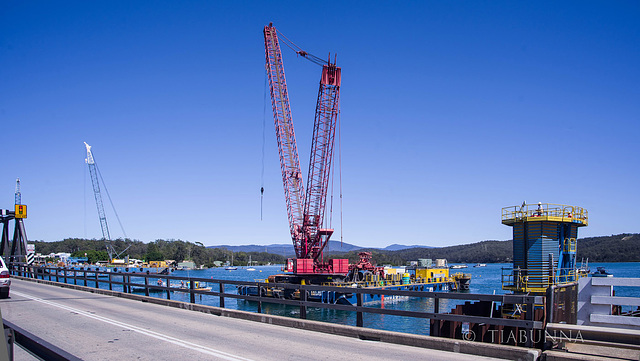 Some months ago I posted an image of the first large barge arriving to work on a new bridge across the Clyde River (PiP1). Since then a second barge has arrived and work is progressing steadily - as seen in PiPs 2 and 3. HFF everyone. Explored. 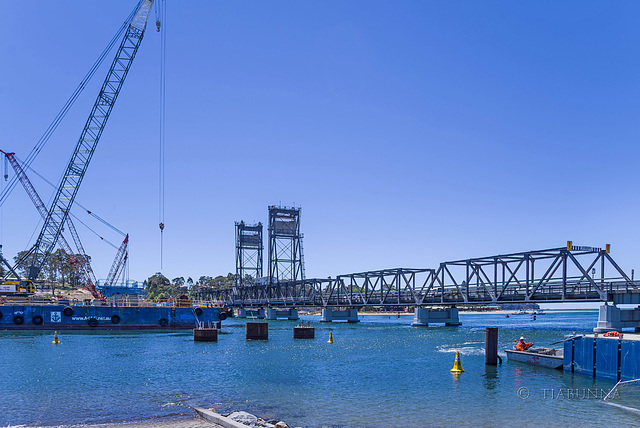 Beginning work on the pylons

39 items in total
Jump to top