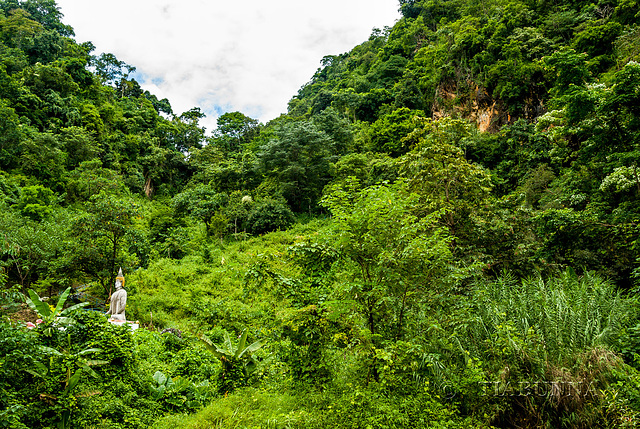 Caution this may distress some people.

During the "Secret War", the US essentially declared the east of Laos as a "free fire zone", bombing all the buildings and attacking any people spotted. I should add that this area was under the control of the Pathet Lao, who eventually won power in Laos. Many people became refugees in the west of the country, but some villagers stayed, living in caves by day and tending their rice fields at night.

The Tham Piew cave was such a refuge, until 24 November 1968 when it was attacked by three fighter aircraft. The bombs from the first two cleared the jungle from in front of the cave, the third sent its bomb load into the cave, incinerating all 374 of the villagers inside. Only one was outside at a safe distance to witness the atrocity and give a report. The cave is now a national memorial and the date is a national Lao Day of Remembrance.

PiP1 - the statue of a soldier, holding a dead child, near the entrance area
PiP2 - the view from the cave, looking in the direction from which the bombers came
PiP3 - the blackened rocks at the cave entry, with little memorials to the people lost
PiP4 - the stairway down from the cave, on the walkway built since the event.

Roger (Grisly) club
An excellent set of images and a sad story of atrocities, so many innocent people wiped out for a political idyll.
2 months ago. | Permalink

©UdoSm club
A very impressive series...
I could add a few more things to my opinion on the Amis, but I leave it here...
2 months ago. Edited 2 months ago. | Permalink

Rosalyn Hilborne club
A very good series and information George. Such dreadful times of war. I used to dread opening the paper, as they often printed very graphic pictures. Atrocities still go on. I don't understand how anyone could be cruel to another human, or animal come to that.
2 months ago. | Permalink

Jean club
Rosalyn has expressed my feelings. It's such a beautiful place. So green and lush. To think of such horrors happening and probably in cold blood. A political act. I wonder what the aircrews felt.
2 months ago. | Permalink

RHH club
Have a good day, George. We are on our way to the Olympic Peninsula.
2 months ago. | Permalink

Rainer Blankermann club
A sad story. But a great photographic work. Thanks for the photo and the explanatory text, George.
Have a good week.
2 months ago. | Permalink

Ulrich John club
Wild and beautiful ! An impressive place, George ! With a scary history ! Thanks for explaining !
2 months ago. Edited 2 months ago. | Permalink

Nouchetdu38 club
This statue in the middle of this superb tropical jungle: a remarkable photo********
2 months ago. | Permalink

Léopold club
I was shocked to know that Laos was bombed during 9 years several times a day on a regular basis. I learned this from a Laos travel guide speaking fluently french when I was In Phnosavan in 2019.
2 months ago. | Permalink

Herb Riddle club
A poynient story George. A well documented series of images for sure -well worth remembering.

Amelia Heath club
A beautiful and lush area, yet. the PiPs tell of its tragic past. Thank you, George, for the history. .
2 months ago. | Permalink