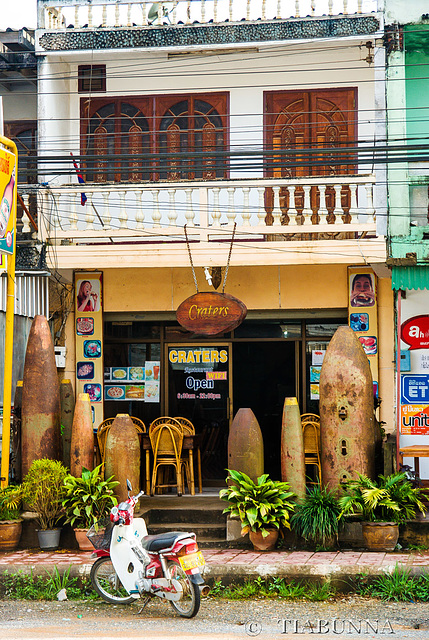 In the township of Phonsavan, not far from the room where I took my previous image, "Craters Restaurant" is known for its array of unexploded American bombs at the entry. Phonsavan township (now the capital of Xieng Khouang province in Laos) has been built since the 1970s, as both it and the former provincial capital after which the province was named were totally destroyed by US bombing.

I had thought of posting this image for HFF, but it's not a happy context.

Xieng Khouang province was one of the most heavily bombed parts of Laos, on which the US dropped over 2 million tonnes of bombs (more, in total, than was dropped by all combatants in WW2) during the "Secret War" between 1969 and 1975 - the equivalent of a plane load of bombs every eight minutes throughout that period. The result can be seen in aerial views such as this one from Wolfgang (ipernity) . Sadly, much of the bombing consisted of anti-personnel cluster bombs "bombies" which were released from containers such as the large shell at right. It is estimated that some 80 million of these dreadful devices remain unexploded and strewn around the countryside, killing and maiming many people yearly.

The "Secret War" (more details here) did not become public knowledge until after the American withdrawal from Vietnam. As for the role of the CIA, which were major players, the reality was close to the film "Apocalypse Now", as they fomented uprisings by the Hmong hill tribes while running their own secret air force within neutral Laos, itself involved in a civil war.

If you can stand it, here are a few more links for those interested in more background:
plainofjars.net/war.htm
blogs.lse.ac.uk/lseih/2020/02/11/bombies-legacies-of-the-secret-war-in-laos
www.peacequest.ca/laos-is-beautiful-too-bad-about-the-80-million-unexploded-bombies

Gudrun, Typo93, RHH, Aschi "Freestone" and 10 other people have particularly liked this photo

Thanks for looking in, Erhard.
16 months ago. Translate | Permalink

Many thanks, Peter.
16 months ago. | Permalink

SADLY PAM, YOU'RE QUITE RIGHT.
16 months ago. Translate | Permalink

It is horrible to be reminded of all this and also to have the actions of the United States in the Middle East in mind and then to have the current President in the press every day...
16 months ago. | Permalink
tiabunna club
has replied to ©UdoSm club

Many thanks, Udo. Sadly, there's more yet - and it really does stick in the memory. As for current events, I think Pam summed it up!
16 months ago. | Permalink
©UdoSm club
has replied to tiabunna club

Yes, you and Pam are right...
But do the Americans understand that, or will they vote for this guy again ???
I would like to know this thoughts... A terrible idea !!!
16 months ago. Edited 16 months ago. | Permalink

Thank you. Yes, it certainly is! Best wishes for the coming week.
16 months ago. | Permalink

Thank you, Ron. Similarly, "those who ignore history are destined to repeat it" .
16 months ago. | Permalink

We have been many days in this town in 2019.
16 months ago. Edited 16 months ago. Translate | Permalink
tiabunna club
has replied to Léopold club

Thanks, Léopold. We had only one night there and I'd like to have stayed longer.
16 months ago. | Permalink

Many thanks, Graham.
16 months ago. | Permalink