The crew regroups The crew The old Sandy Bay hut - and neighbours Full moon over Mawson Why did we stop? Ghost of Christmas (long) past Around in East Bay Digging out #1 Digging out #2 Visiting Adelie and Emperor penguins A year's supply Leaving Mawson Looking south over the plateau New generator Back to Mawson Leaving Mawson #2 Merry 66 Xmas Aerial Mawson Mawson gets a radar Getting them out Up and away Black-browed Albatross Adelie penguins Blizzard aftermath VW "Antarctica 3" heading across sastrugi Weather closing in Another blow Moving again Looking further south from Mt Lacey Midnight sun through Weasel Gap Climbing Bechervaise Surveying on Mt Lacey Sunset and a parting iceberg Arrival at PCM Nov 1966 Balloon away The "Nella Dan" returns. Prince Charles Mtns Panorama Blizzard aftermath #2 North past nunataks All about maps Mt Bechervaise Up to the plateau from Mawson Pre-heating the Polaris Heading away Trig point on Peak 7 Travelling past sunset Rolling past Depot Peak Blizz'd In Spring tripping Cold run View from Mt Twintops Looking across to Mt Hordern Antarctica 3 at the Central Masson Ranges Regal visit Snowtrac on the slope Nacreous Clouds Nacreous Clouds at sunset Vehicles at Mawson The Mawson bar Midwinter dinner Dog teams on the sea ice Snowtrac near Mt Henderson 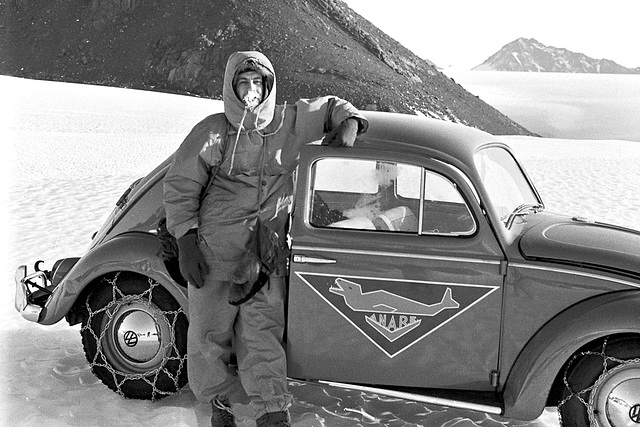 From a newly copied but very ancient negative (1966). That's me among the Central Masson Ranges, after a climbing day a short distance inland from Mawson Station in Antarctica. The surface is blue ice and I'm leaning on VW "Antarctica 3" - the third in a series and the first 'usable' motor cars on the continent (one of the early explorers had a car which proved near unusable). See my new article "Preserving history". Here's a musical link.

Suggested groups:
52 comments - The latest ones

Tacheles club
Do I see some ice on your moustache, George? ;)
Vangelis was a great musician, doubtlessly.

PS: There is no access on the linked article. Iper refuses.
PPS: I like the Herbie. An this is my alternate music selection: Stars In Your Eyes
4 years ago. Edited 4 years ago. | Permalink
tiabunna club has replied to Tacheles club
Thanks, just a bit of ice there, Norbert. :-) I've now fixed access to the article, sorry about that. Also enjoying your music link (playing in the background as I type).
4 years ago. | Permalink

slgwv club
Historic indeed! And a great opportunity to get to an area most folks will never see. What was the expedition for?
4 years ago. | Permalink
tiabunna club has replied to slgwv club
This day outing was essentially recreational/training, Steve. My job at Mawson was as a weather observer, other sciences there were auroral physics, cosmic radiation physics, seismology, glaciology. Later in the year I was part of a four month inland surveying trip (ref. my latest article).
4 years ago. | Permalink

Dave Linscheid
I have worn that frosted look many times my self:)

George... I am sure you have read about Henry dying... so damned tragic

Janet Brien club
Totally amazing image, George. Your images of Antarctica leave me in awe. Thanks so much for sharing these with us. I enjoyed reading your article too, it is so important to try to keep things in order. A very big job that is!!
4 years ago. | Permalink
tiabunna club has replied to Janet Brien club
Thanks very much, Janet and for your kind comment on my article. Keeping track of everything is quite a job indeed.
4 years ago. | Permalink

Roger Bennion club
A crackin' entry to 'Sight and Sound'. A fascinating and thought provoking article, a treasured shot I'm sure and so much complimented by the music. Faves all round and thank you for posting, George.
4 years ago. | Permalink
tiabunna club has replied to Roger Bennion club
Thank you very much, Roger, also for your fave and kind comment re my article.
4 years ago. | Permalink