← All with the keyword: Pentax K30
← Those by: tiabunna 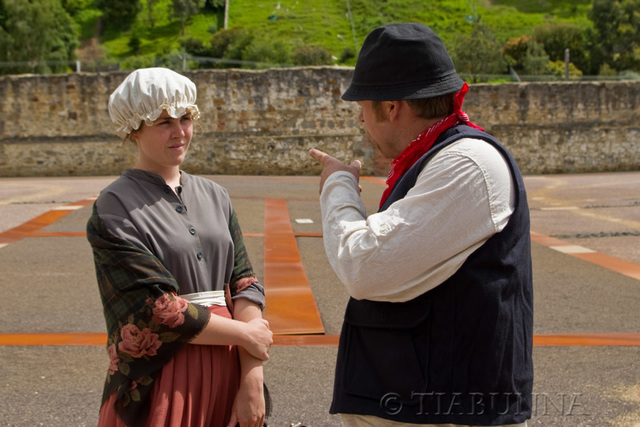 The British colony at "Hobart Town" was established in Van Diemen's Land as a convict penal station in 1803. Among the remnants of Hobart's convict era 'Female Factory', the "supervisor" gives a warning to a "newly arrived female convict" on the penalties which may apply if she causes any offence or breaks any rules. These are, of course, two actors giving a very impressive information session to a group of tourists. Little more than the outside walls remain of the original structure.

Over 6000 transported convict women (the list is incomplete) found themselves incarcerated in Hobart's "Female Factory", either on arrival by ship, or between work placements. It operated from 1828 to 1856, at which time it became a jail before being mostly demolished after closing in 1877. Several smaller ones operated in country centres. These essentially were "workhouses" crossed with rather nasty prisons. You can read more about it here: www.femaleconvicts.org.au/index.php/convict-institutions/female-factories/cascades-ff

Rita Guimaraes
Thanks for the nice shot and all those informations.
We all heard about this, but I'm sure we will never know the "real" events.
I really agree with Joan.
6 years ago. | Permalink
tiabunna club has replied to Rita Guimaraes
Thank you very much, Rita. In most of Australia the convict reminders have long since been removed, but in Tasmania there still are many reminders - which now are being appreciated for their heritage and historic importance.
6 years ago. | Permalink

Meadowmom club
I'm thinking: what crimes were women transported for? The young performer here looks rather innocent.
6 years ago. | Permalink
tiabunna club has replied to Meadowmom club
I hope I'll be excused for copying an extract from the site I listed in my intro comments:

Female convicts were a varied bunch. They ranged in age from children to women in old age—the youngest currently recorded in our database is aged 10 years, and the oldest is aged 81 years. Most of the women, however, were in their twenties or thrities—of child bearing age.

Many of the convicts were single, but some were married and others widowed. A small proportion brought children with them on their journey of transportation. However, most left family behind in their homeland, for many this included children. Some convicts were transported with family members, or family members had come before them, or came after them.

Many of the crimes for whicy they were transported are considered minor offences by today's standards. The most common crime by far was stealing—food, clothing, money, household items—mostly items worth no more than £5. (More follows in the original).
6 years ago. | Permalink