The crew The crew regroups Frosty beard Full moon over Mawson Why did we stop? Ghost of Christmas (long) past Around in East Bay Digging out #1 Digging out #2 Visiting Adelie and Emperor penguins A year's supply Leaving Mawson Looking south over the plateau New generator Back to Mawson Leaving Mawson #2 Merry 66 Xmas Aerial Mawson Mawson gets a radar Getting them out Up and away Black-browed Albatross Adelie penguins Blizzard aftermath VW "Antarctica 3" heading across sastrugi Weather closing in Another blow Moving again Looking further south from Mt Lacey Midnight sun through Weasel Gap Climbing Bechervaise Surveying on Mt Lacey Sunset and a parting iceberg Arrival at PCM Nov 1966 Balloon away The "Nella Dan" returns. Prince Charles Mtns Panorama Blizzard aftermath #2 North past nunataks All about maps Mt Bechervaise Up to the plateau from Mawson Pre-heating the Polaris Heading away Trig point on Peak 7 Travelling past sunset Rolling past Depot Peak Blizz'd In Spring tripping Cold run View from Mt Twintops Looking across to Mt Hordern Antarctica 3 at the Central Masson Ranges Regal visit Snowtrac on the slope Nacreous Clouds Nacreous Clouds at sunset Vehicles at Mawson The Mawson bar Midwinter dinner Dog teams on the sea ice Snowtrac near Mt Henderson Dog team passing iceberg View from the office window Meet Orhog 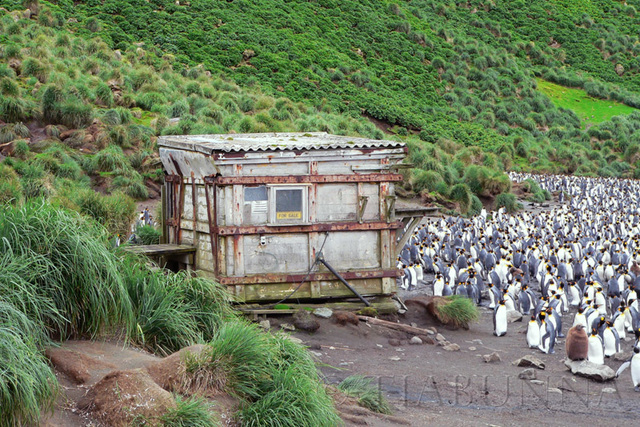 Dating from the early 1950s. As with the old hut at Lusitania Bay, the Sandy Bay hut was a recycled aircraft engine packing crate, installed when the Australian National Antarctic Research Expeditions were new and short of funds! But it did provide overnight (if basic) accommodation. It was good to see it surviving after some 50 years, but it looked very neglected (there is a glossy new hut not very far away). Parks Tasmania refused to allow the tourists up close to inspect it.

Apart from the hut, look for the elephant seal pups among the tussocks to the left (note) and the yellowed dying tussocks - in 1968 this hut had been surrounded by tussock and other vegetation, but that was under savage attack by rabbits at this stage. See the note/photo at top left for more details on rabbits on Macquarie island.