Gippsland forests Out of Queenstown Out on the Hay Plains Into the Arid Zone Misty Road Nearing Mannahill Cotton Sunset panorama Down the valley Didn't it rain! Out past Hay Sheep country Heading home Down the valley Through the salt pans Outback tin man Hill village School's out Island transport No wonder... Toward Tiananmen Square Toward Beijing Beijing arches Through the bush Along the road Along the road Truckin! Rural road Time to search Dopey animal! Along the highway Along the road Burnt forest Lao tourist "bus" Through the Poplars

← All with the keyword: road
← Those by: tiabunna 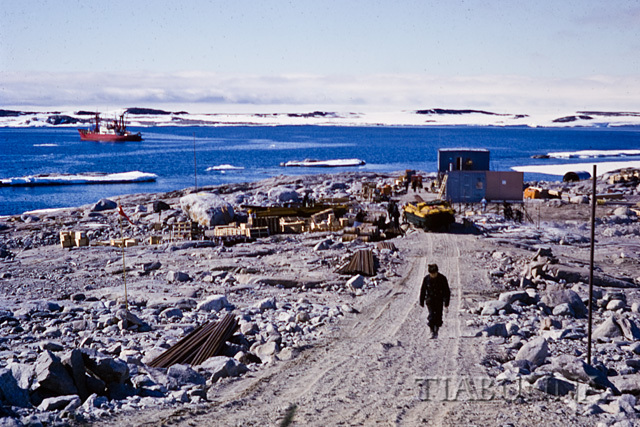 From an old slide, copied too small here long ago. This construction site was known, at the time, as Repstat - short for Replacement Station. The old Wilkes base, built by the USA during the 1958 International Geophysical Year, was across the bay behind the ship, but mostly buried under metres of snow and in an unsafe condition. We spent a fortnight working here and, when we left, had erected a line of huts up the right of the road (one of the DUKWs on the road).

The new station was later named Casey, but It has since been rebuilt yet again in a much more substantial form. You can see it here (also a 48 hour webcam video).

While we were there, another of the Lauritzen Line "Dan" ships, the Thala Dan also arrived and we saw the very uncommon sight of two of them in an Antarctic port together (see PiP). Some of the old Wilkes base buildings are visible on the horizon in this image.

Would be interesting to see how things have changed in over 50 years.
10 months ago. | Permalink
tiabunna club
has replied to RHH club

Well, this was a new design for an Antarctic station, Ron. Unfortunately it didn't work quite as planned, so the entire station was rebuilt in a much more substantial form some 10-20 years ago. www.antarctica.gov.au/webcams/casey
10 months ago. Edited 10 months ago. | Permalink 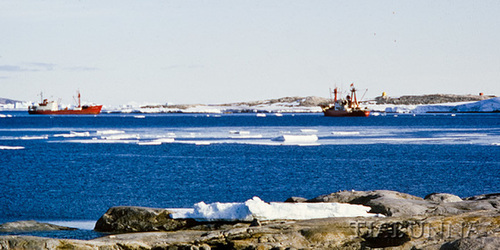 A very uncommon Antarctic meeting of the "Nella Dan" and "Thala Dan".
2 months ago. | Permalink

interesting and fascinating, your job was an adventure!
2 months ago. | Permalink

Fascinating story and pictures. And to think that now a friend's daughter spent six months in antarctica working in a post office where cruise ship passengers posted their postcards.
2 months ago. | Permalink

I remember reading about your adventures in Antartica when I first visited your gallery after joining Ipernity. So fascinating! Thank you for the story, George, and also the link to the present day Casey Station. It had a lot of interesting information.
2 months ago. | Permalink

Interesting to see.
2 months ago. | Permalink