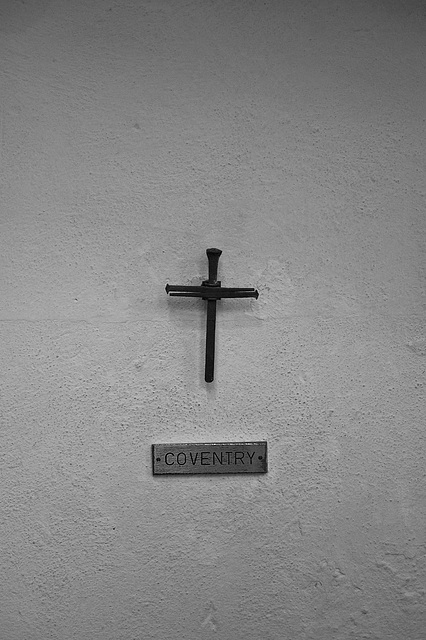 St. Nikolai Church, Kiel, Germany
This Cross Of Nais from Coventry was the first cross the was handed over to the former enemy on the continent in 1947. Made from three nails from the cathedral of the English city Coventry, destroyed in 1940 by the Germans. Right after the destroying in the middle in the time of the terrible enmity the clergymen decided to send „the CROSS OF Nails" as an indication of reconciliation to Germany after the war. Also different churches have a nail cross (e.g. in Hamburg, Berlin and Dresden), but this is the first, which was presented in a city also destroyed by British combat fliers.
(German: www.st-nikolai-kiel.de/inhalt/raum/coventrykreuz.html)
www.crossofnails.org
CC BY-NC-ND 3.0 Siebbi Cross of Nails

This cross is rather small, about 10 or 15 cm long. It's on the wall left from the altar on the three steps upper level from where I also took the picture of you three.