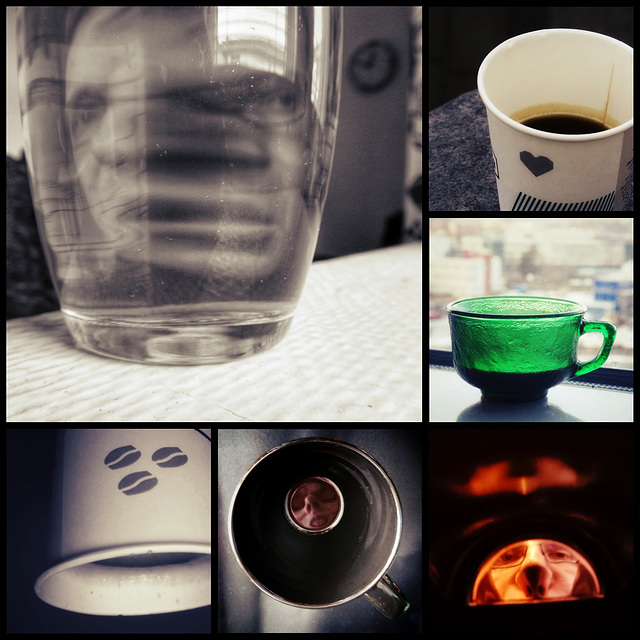 In Finnish we have very similar expression, and I have always wondered what does it mean. Well, luckily we have Google these days. Although, one can't always be sure what online information is reliable or not.

Anyway, the first sources I found claimed that the cold coffee makes one beautiful because the coffee is no longer warm after the time spent to do something else. So, somewhat sexist claims were that especially women spend so much time on their makeup, that they forget to drink their coffee while it is still warm. But who's fault it is then? One should blame the person in the household who can't wait, and must brew the coffee before everyone else are ready to enjoy it together... ;-)

But then I found sources where the origin of the phrase was tracked way back to baroque period (early 17th century). At that time heavy makeups and wigs became fashionable, as did coffee. And makeups at that time were much less water and heat resistant than today. So, if one wanted to enjoy coffee after makeup, it would be better to drink it cold, to avoid hot steam spoiling all the hard work.

One has to keep in mind that both makeup and coffee were privilege of nobles, merchants and aristocrat. But so were the "social media" at that time. Music was one form of media and advertising, and for example Johan Sebastian Bach wrote a cantata to ridicule the suspicious attitudes against coffee at that time.

Anyway, I sincerely recommend cold brew coffee, if you wish to avoid the hot steams ruining your "heavy makeup" =)

P.S. The collage done with Pixlr for Android. It comes with number of layouts, and allows one to change the overall aspect ratio and frame colors.
CC BY-NC 3.0 Sami Serola Coffee 11/50

Here's some more coffee though =)
youtu.be/s4PpNlO_ZCs
3 months ago. | Permalink

Edna Edenkoben club
I agree. It makes for beautiful zombies! :-)))
3 months ago. | Permalink

Ern Jacoby club
Thank you for this entertaining research, in times nothing left to do enjoying coffee in all variations .....
3 months ago. | Permalink

Wierd Folkersma club
do you know this? ineedcoffee.com/coffee-tasseography-fortune-telling-with-coffee
It is known in Holland as "koffiedik kijken"
3 weeks ago. Edited 3 weeks ago. | Permalink