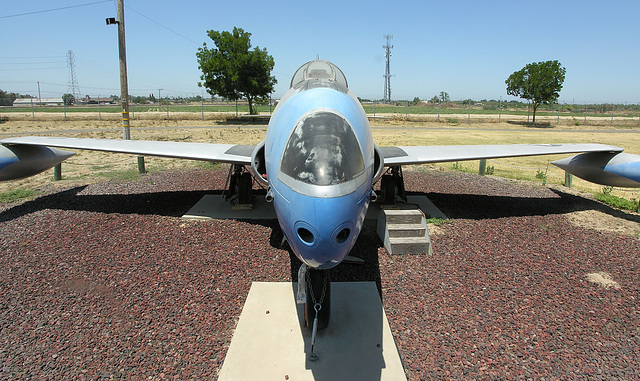 The P-80 recorded a number of firsts. It was the first Air Force aircraft to exceed 500 MPH in level flight, the first American jet airplane to be manufactured in large quantities, and the first Air Force jet to be used in combat. In 1943, Lockheed was invited to design an airplane around British Halford H-1 turbojet newly developed in Britain. A design team led by Clarence "Kelly" Johnson, who also designed the U2 and SR-71, completed the project and the prototype flew in in 143 days. Production aircraft used the GE J-33 engine. It was used extensively in Korea as a fighter-bomber. This plane on exhibit at Castle Air Museum carries the markings of Lt. Russell Brown, who shot down a MIG-15 on November 8, 1950, the first jet-to-jet kill.
CC BY-ND 3.0 Ron's Log Lockheed P-80B Shooting Star (8414)
Suggested groups:
Comments