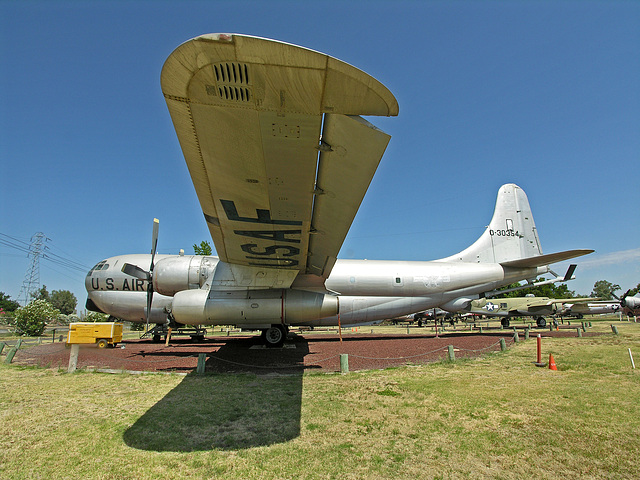 Originally designed in 1943 as a cargo version of the B-29/B-50, a flying boom and tanks in the fuselage were added and it became an in-flight refueler. Only 74 cargo variants were built, while 816 were tankers. It was capable of off-loading 15,000 gallons of fuel. Jet engines were added on the outboard wings to enable it to operate from shorter runways with a full load. The aircraft in this photo saw service with the Strategic Air Command and, after the jets were added, with several Air National Guard units before being retired in 1977. It was retrieved from an Air Force storage facility in Arizona, restored to flying condition and flown to join the Castle Air Museum collection. A civilian version, the Stratocruiser, was used by several airlines, including Pan Am, Northwest and BOAC.
CC BY-ND 3.0 Ron's Log Boeing KC-97-L Stratofreighter (8341)
Suggested groups:
Comments