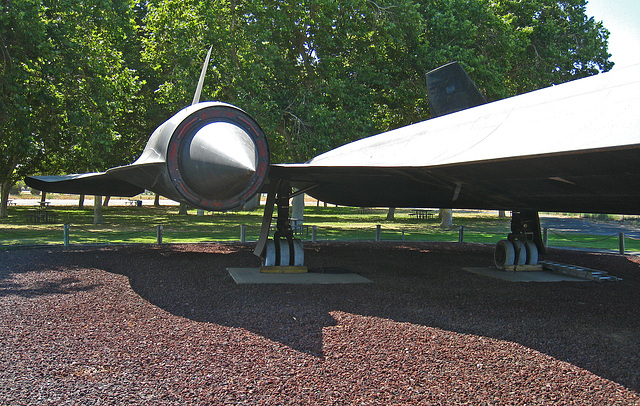 Designed by Clarence "Kelly" Johnson and Lockheed's "Skunk Works," the Blackbird was designed to look at the Earth from over 80,000 feet and to fly fast (over Mach 3.3 or 2,350 MPH). One flew from Los Angeles to Washington, DC, in 64 minutes, 5 seconds, at an average speed of 2,153 MPH. This aircraft on display at the museum flew the most operational missions of any SR-71. It was the first to fly over Vietnam and it few photo reconnaissance over Libya in 1986. Thirty-two were based at Beale AFB, California, on Okinawa and in the UK. Though they were shot at over 1,000 times, none were ever lost to hostile fire. The SR-71 was retired in 1990, but three were refurbished and returned to service in 1995 and again retired at the end of 1997.
CC BY-ND 3.0 Ron's Log Lockheed SR-71A Blackbird (2927)
Suggested groups:
Comments