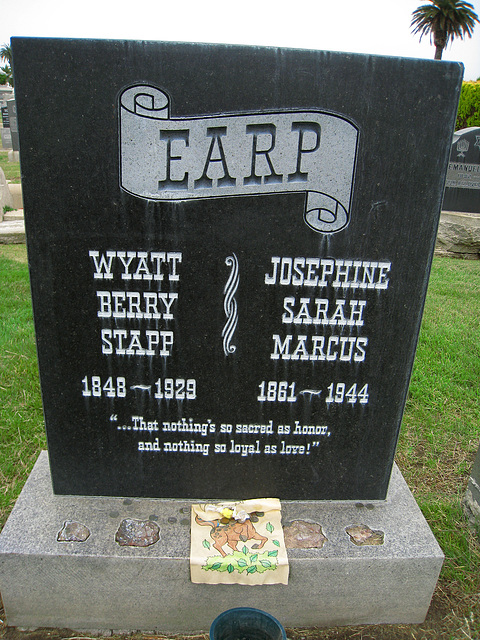 From his Wikipedia biography:

"Wyatt Earp died at home in the Earps' small apartment at 4004 W 17th Street, in Los Angeles, of chronic cystitis (some sources cite prostate cancer) on January 13, 1929 at the age of 80. Western actors William S. Hart and Tom Mix were pallbearers at his funeral. His wife Josie was too grief-sticken to attend. Josie had Wyatt's body cremated and buried Wyatt's ashes in the Marcus family plot at the Hills of Eternity, a Jewish cemetery (Josie was Jewish) in Colma, California. When she died in 1944, Josie's ashes were buried next to Wyatt's. The original gravemarker was stolen in 1957 but has since been replaced by a new standing stone."
CC BY-ND 3.0 Ron's Log Hills of Eternity - Wyatt Earp (1302)
Suggested groups:
Comments