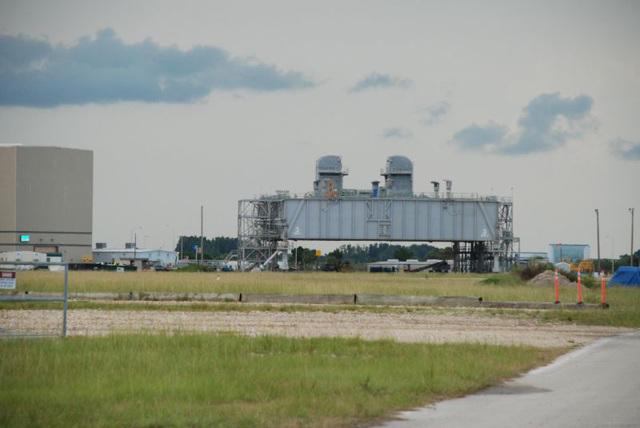 I think this is MLP-3, which should be getting moved into the VAB in the next few weeks to begin stack operations for Atlantis' next flight. The MLP is parked in the maintenance area behind the VAB and OPFs, next to the brand new MLP being constructed for Constellation's Ares-I rocket.

The two mailbox-like bumps on the top are the tail service masts, through which the propellant lines and various electrical connections are mated to the back end of the Orbiter until takeoff. Each contains a large plate loaded with fluid and electrical quick disconnects, which at liftoff is released from the Orbiter and retracted into the mast at high velocity and with great force, at which point a heavy door slams shut behind the plate to protect it from the Shuttle's plume. It's not apparent from this picture just how large the masts are, or how big the plates are, or just how impressive that operation really is.

IIRC, the building in the background on the right is the Saturn V Center.
Suggested groups:
Comments