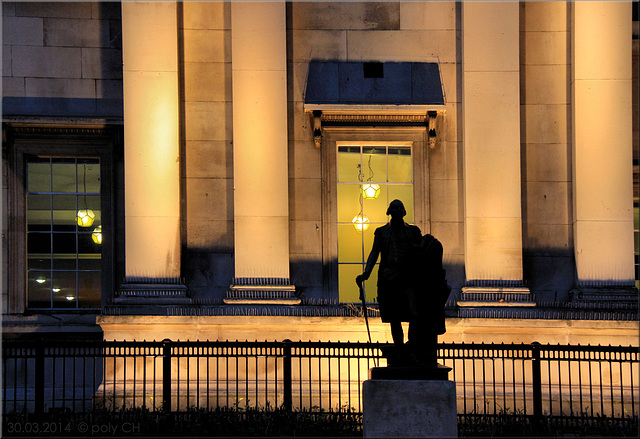 On Trafalgar Square (northern side) at the the main facade of the Nartorial Gallery Building is the statue of US President George Washington. It is the replica of Jean Antoine Houdon's marble statue in Virginia.
It is not a big statue, but it is the meaning of what makes it interesting and curious.
George Washington was an officer of the British Army during the war in the USA. When he learned of the large amount of taxes that the British imposed on the Americans, he left the British Army and fought against it by promising that he would never again gain a foothold in England.
He even had a house and lived in London for years.
Considering what George Washington was, Britain offered this statue, but how to solve the problem of "I will not set foot in England again" ??
Britain continually receives green emerald grass from Virginia, and where the statue is, over American grass. All the grass you see around the statue comes from Virginia in the USA.

Sarah P. club
A very fine fence! I didn't know there was a statue of George W. in Trafalgar Square, and that's a funny story about the Virginia grass (though I suspect there's some English weeds that grow in-between. :-)
9 months ago. | Permalink

Karen's Place club
That's some interesting information that I didn't know and what a gorgeous image. I just love the way you've captured this statue. Really nice work, polytropos!
9 months ago. | Permalink