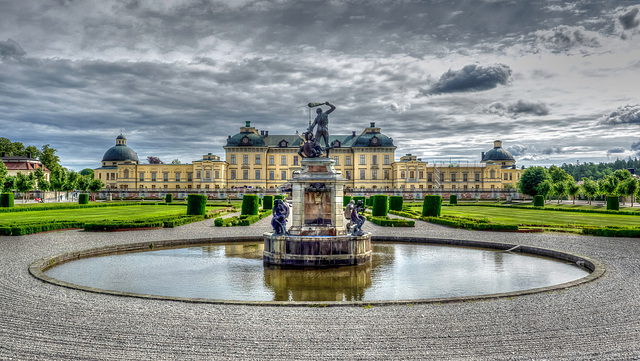 The name Drottningholm (literally meaning "Queen's islet") came from the original renaissance building designed by Willem Boy, a stone palace built by John III of Sweden in 1580 for his queen, Catherine Jagellon. This palace was preceded by a royal mansion called Torvesund.
Catherine Jagiellon (Polish: Katarzyna Jagiellonka; Swedish: Katarina Jagellonica, Lithuanian: Kotryna Jogailatė; 1 November 1526 – 16 September 1583) was a Polish princess and the wife of John III of Sweden. As such, she was Duchess of Finland (1562–83), Queen of Sweden (1569–83) and Grand Princess of Finland(1581–83). Catherine had significant influence over state affairs during the reign of her spouse, and negotiated with the pope to introduce a counter reformation in Sweden.

The current Swedish royal family have used Drottningholm as their primary residence since 1981. Since then, the Palace has also been guarded by the Swedish Military in the same fashion as Stockholm Palace.

Annemarie, Uli F., Nouchetdu38, cammino and 10 other people have particularly liked this photo

Awesome image !!
Visted there a couple of years ago.
2 years ago. | Permalink
Pilago club
has replied to Jaap van 't Veen club

The weather was not very good that day. I have made the round trip in the group through Sweden and Denmark. Advantages and disadvantages. The main advantage - we have seen a lot, disadvantage - it was sometimes too fast.
2 years ago. | Permalink

Very nice, but enlarged it looks marvellous!
2 years ago. | Permalink