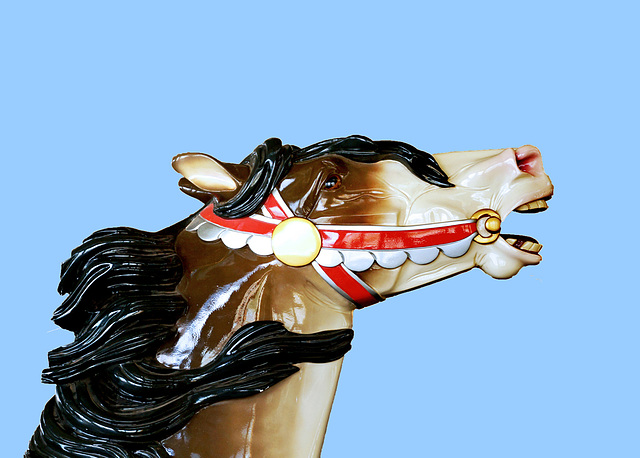 By master carver Charles Carmel, on the B&B Carousell, Coney Island, Brooklyn, New York, the carousel has 50 hand-carved horses and two chariots, as well as a 66-key German-made Bruder Gebruder organ. It is the work of William F. Mangels, a builder and an inventor of early-20th-century amusement rides who had a workshop on 5th Street and Surf Avenue in Coney Island. Mangels patented a new type of gearing that improved the up and down movement of non-stationary horses. Although originally built in 1919 in Coney Island with a frame dating from 1906, it spent its first decade and a half in New Jersey, possibly in Asbury Park. In the early 1920s it received a new set of horses that were carved by Charles Carmel, one of Coney Island’s most celebrated carousel makers. It was finally brought to Coney Island in the 1930's after being purchased by William Bishoff and Herman Brienstein who renamed it the “B&B Carousell” (with the two “L”s). By 2005, the B&B Carousell was the last surviving carousel at Coney Island. Its owners planned to dismantle it and auction it off, horse by horse but the city stepped in and paid $1.8 million to buy the intact merry-go-round. It was sent to Ohio where another $1.7 was spent for its restoration which took 8 years. During restoration, the signature of the master carver Marcus Charles Illions was uncovered on the flank of one of the horses. It is the only horse on the B&B Carousell by Illions, a Coney Island carver noted for his flamboyant style. The horse is one of four created in 1909 to celebrate the centennial of Abraham Lincoln’s birth. The other three are in private collections. Apparently, an earlier owner had removed one of the horses to give to his daughter before selling the carousel. The subsequent owner then filled the hole with the Illions show horse. It is the most ornate horse on the carousel. Its body armor is covered in colorful rhinestones, decorative scales, and a relief of Lincoln’s profile. (483 )
Suggested groups:
Comments