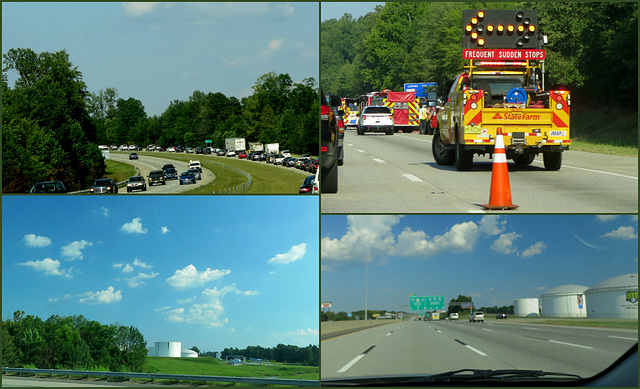 It was a leisurely visit with relatives -
just catching up with goings on -
then, when we left -
we came back the same way we had gone over -
but -
the road 'gods' weren't kind -
all of a sudden -
traffic was crawling -
when we eventually got to the problem -
it was one lane only -
a pickup truck had an engine fire -
nobody seemed injured -
no ambulance on site -
First Responders and Fire Trucks -
as traffic snaked through and came upon multiple lanes again -
it was same ol same old thing -
we were going the speed limit -
but certainly not fast enough for many -
That is the description of the top 2 photos -
across the bottom is a tank farm -
" an area used exclusively for storing petroleum in large tanks "
- from Webster Dictionary

Why did I take photos of the tank farm? Because I've seen it so, so many times and never had !
That is the only reason .. plus, even though they can be dangerous -
rather have them above ground than below !

Like a friend says, "you took that photo because it was there."
True -- for you, Dick

TimC club
I've been under the mis-apprehension, Peggy, that it was only here in the UK where the smallest of road incidents are turned into a full blown crisis by our emergency services. These dramas usually last for hours and are all at the expense of the general road-going public.
14 months ago. | Permalink
Peggy C club has replied to TimC club
No . In Florida, when Mr C had a flight out of Tampa International Airport .. he left our home 3 hrs before flight time ... and was the last one on the plane ! It was only 45 miles from our house ...
A section of hwy, that one had to use to get to the airport, has been named 'Malfunction Junction'.
If a car wreck happens there .. just forget what time you thought you would get to the baseball game-- you won't get there until the 3rd inning.. if you are lucky!
Will say North Carolina has better roads than Florida -- and they do keep clear them much better. This was a pain, but only about an hour added on to our time getting home.
I know some souls who would cringe at an extra hour ... but, everybody has to be someplace !
14 months ago. Edited 13 months ago. | Permalink

Mario Vargas club
as the song saids: some days are diamonds some days stone
14 months ago. | Permalink

Dick M
Always. The fun is the pressing of the shutter button. Other than the "tank farm", you could have pressed the button at the same scene down here, as you well know.
13 months ago. | Permalink

Peggy C club
Thank you all for the visits and comments ...
Diane, the traffic moved slowly but didn't really take too long.
Tank farm ..wish I could count the number of times I've passed by ....... probably in the 100's.
13 months ago. | Permalink

micritter club
Why do we take pictures of anything? (I keep asking myself). I came across this (but I'm only partially convinced):
www.youtube.com/watch?v=43n-2iSZ_OU
13 months ago. | Permalink