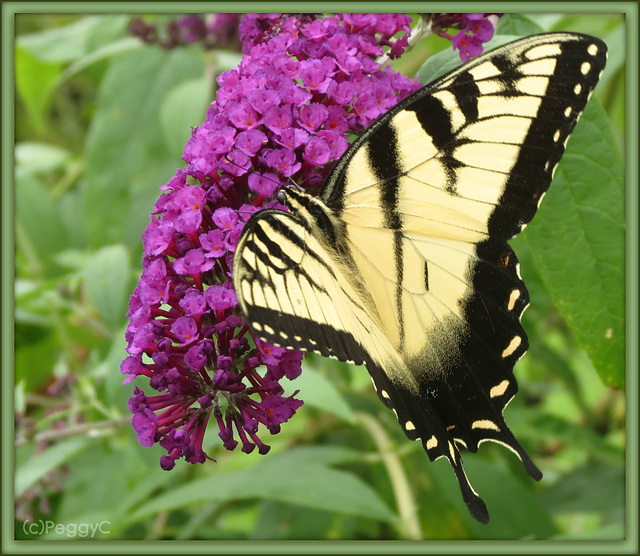 said the Eastern Tiger Swallowtail to the human -
we were told to expect you and the black box -
some of my friends have joined me -
but, being a human -- you will have to look up who they are !
(c) All Rights Reserved
.. more info:
"The Eastern tiger swallowtail, scientifically known as Papilio glaucus, was designated as North Carolina's state butterfly in June of 2012.
The butterfly is native to North America, and one of the most common and most easily recognized species found in the Eastern U.S.

It's widely accepted that the Eastern tiger swallowtail was the first North American butterfly species to have been illustrated. John White - an artist and cartographer who was the governor of the Roanoke Island colony (that came to be known as the Lost Colony) - first drew the species in 1587 while on an expedition for Sir Walter Raleigh in Virginia.

The male is usually yellow with four black stripes on each wing. Females are usually yellow or black. You'll find them from spring to the fall, and usually around the edges of woods, in open fields, in gardens or by roadsides. They usually hang out around the tops of trees, but they like to drink from puddles on the ground (sometimes in large huddles or clusters)."