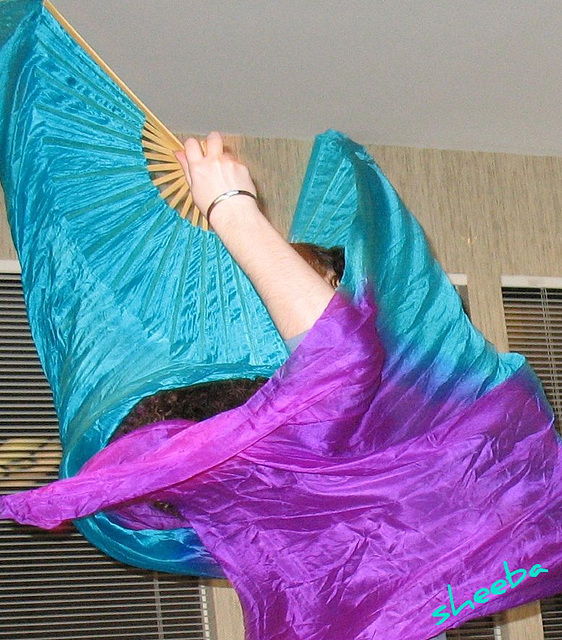 3. Passion for life... it is too short! Live each day as though you won't be here tomorrow; make it count!

4. Don't make New Year resolutions, but IF I did, it would be to learn more hand drum rhythms ... dumbek/doumbek .. djembe ..frame drum... want to learn to play a riqq.. got the instructor in mind! She is awesome.. so talented!

5. play doumbek (dumbek), djembe & frame drum.. for my own pleasure and to accompany our Tribal dance troupe

6 .If I could afford it, would go to one drum workshop a month! Got the time.. got to find the money.

7. Always come away with more than I had going in to a workshop.. could it be that I understand a little more about the rhythms?

8.. Continue our drum / dance gatherings at the coffee shops. Like them indoors; we get to know each other more; it becomes an extension of ones family.. a chosen one.

9.Learning creative tasseling... ATS ( American Tribal Style ) beaded tassels for hip belts; just like to make them.. create different color combos. Have some 'orphan jewelry' that is just screaming to be attached to some tassels!

10.. Live to eat .. love to eat... not raw unless veggies. Middle Eastern /Indian/ Thai/ Chinese/ Polish (my grandparents-in-law were from the old country.. what a spread of foods )

11.Do procrastinate (just ask my hubby) except attendance & participation 2 drum circles a month.. one is considered by those souls who come to share energies as 'my circle'; keep telling them that it is our circle.. but, as a friend told me "if you build it they will come"... that was 3 yrs ago..Faces change; commitments are different (we usually schedule vacations around drum circle time... some I just won't be absent.. like an anniversary or Halloween!Is drumaholic a word? If so, I am. I drum daily (have really nice neighbors).

13. . once in a while I get out my zills ( am not too swift on them) much to the chagrin of the felines who let me live here..... have a feeling they might cancel my lease! Could put mufflers on them.. the zills.. not the felines!

14. Like to bake..Christmas is a good excuse. "But these are gifts!" Going to a friend's home... "I'll bring dessert!"... little do they know how many times they have been guinea pigs for a newly found recipe! Must admit the dark chocolate Easter eggs were a hit; oh, and the stuffed portabello mushrooms....It's time for another recipe..

15. Have a wonderful time touring the world through Flickr! It's the only way ... no passport.. no shots.. no problems.. Y'all have been so nice.Okay..."y'all" is a Southern expression.. combining 'you & all'.. there are a lot of them, but don't think it any odder than someone from Pennsylvania asking, "are you going with?"..... with who... the sentence is hanging in mid-air! (yes, have 2 'chosen sister' from PA!)

16. Ramble.. yes.. must put these words out before they fly away! . Read... "When the Women Were Drummers", by Layne Redmond and "The Brain that Changes Itself", by Norman Doidge, M.D.No, haven't finished either, but like the difference in subject... yet, there are some similarities.. when one drums, one uses both sides of the brain.. memory is involved in keeping the names of rhythms and the form of them together... I have to find a way to keep the 'dreaded M's' in memory!Malfoof, Masmoudi, Maqsoum..... which pattern goes with which one!!! I keep my cheat sheet in my drum case!

Until we as humans value each other; value our past and see the need to keep the past as a guideline to the future, neighborhood after neighborhood will fall... all in the name of "Progress".

Progress isn't always progress, just as bigger does not equate to better.

We have to decide .... we are more alike than different .. we need to talk and listen to what is said .. no person, religion, idea is the only one ... embrace differences and love each other.

Thoughts and words by Peggy C ..